Psychologists have been trying to figure out the science behind procrastination for over 120 years. William James (often referred to as to the ‘Father of American Psychology’) stated that ‘nothing is so fatiguing as the eternal hanging on of an uncompleted task’. There are many factors that cause procrastination, which we even explored in our Why Do We Procrastinate? blog series.

So how big a problem is it, which students are most likely to procrastinate and what can be done to combat it?

The Problem with procrastination

Procrastination is extremely common. 75% of students consider themselves procrastinators, with 50% doing so regularly and to a level that is considered problematic. The three most common ways that students report procrastinating? Sleeping, playing and watching TV (although this finding came from a study 15 years ago, and we would expect being on their phones and social media to be more prominent now).

Researchers have found that procrastination is associated with low self-esteem, irrational beliefs, a fear of failure, depression and poor study habits. Furthermore, those who procrastinate have been found to be more stressed and likely to be ill nearer a deadline, often culminating in lower exam results.

Will You Pass Our Procrastination Test?

Before we go on to our next section on how to overcome procrastination, here is a quick procrastination test. There is a video on YouTube that will not educate or entertain you. It is incredibly boring. Will you click on the link and procrastinate reading the rest of this blog, or will you continue below and read our top tips? You can see the boring video here.

How to Overcome Procrastination

So how can we help people to procrastinate less? Here are 7 tips that can help: 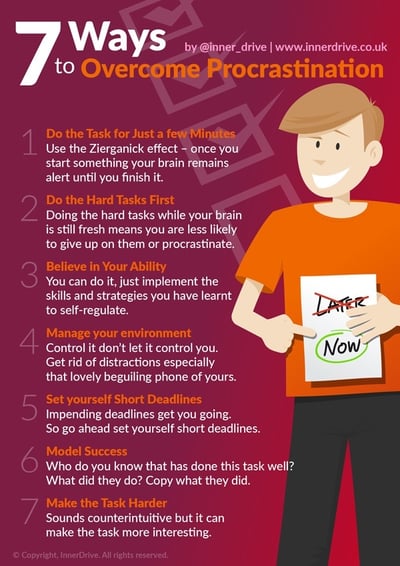 Do the task for just a few minutes

Not only do procrastinators spend longer distracting themselves doing the ‘wrong things’ but they also delay starting the ‘right’ things. This was the finding of a study into students who procrastinate. To combat this, Professor Richard Wiseman talks about The Zierganick effect, which describes how once you start something, your brain remains alert until you finish it. Starting a task is often the hardest part. If you can persuade someone just to start it for a few minutes, the brain's desire to see it through to completion should then take over.

Do the hard and important tasks first

Our daily biological clocks, known as our Circadian Rhythm, ensure that we are often at our most alert at about 10am before we suffer a mid-afternoon dip. The harder the tasks are, the more energy and concentration we need to complete them. It therefore makes sense to do the hardest and most important tasks first because trying to start them when you are tired is difficult, often resulting in people putting them off for another day.

If you can see temptations, you are more likely to be distracted by them, and therefore procrastinate. For example, a recent study found that having your phone out and in sight, even if you are not using it, can make you perform 20% worse than if you had put your phone away. The authors of this study state that ‘the mere presence of a cell phone may be sufficiently distracting to produce diminished attention’. Consider your working environment; is it conducive to the task at hand or one where procrastination can flourish?

Set yourself a short deadline

In his meta-analysis on procrastination, researcher Piers Steel notes that ‘it has long been observed that the further away an event is, the less impact it has on people's decisions.’ Break down the task and give yourself a short deadline for each part.

Increase confidence and self-belief – Students who believe that they won’t be successful at the task at hand are more likely to procrastinate. One way to increase their confidence is to highlight how others who have been in a similar position have been successful (psychologists call this ‘modelling’). This can make the task at hand seem achievable and provide a possible template to follow.

This may sound counter-intuitive. Surely a harder task will lead to someone wanting to put off the task even more? Apparently not. People report a higher sense of satisfaction if they have successfully completed a difficult task. To combat high achieving students who may get bored, making the task a little more challenging should work, as long as it is still achievable.

Procrastination not the only thing stopping you revising? Take a look at our guide The Best Ways to Revise.