How Do You Actually Develop A Growth Mindset?

How Do You Actually Develop A Growth Mindset?

Most people in the education and sport worlds now know the difference between fixed (ability is set in stone) and growth mindset (ability is malleable). But how do we actually help develop a growth mindset? What are the sorts of behaviours and habits that we should be encouraging?

What is a Growth Mindset?

The most common knowledge around growth mindset remains its difference from a fixed mindset. We’ve blogged previously about the best way to capture people’s attention and desire for developing their mindset, as well as why it’s best not to overstate the benefits. But what people really want to know now is how to develop a growth mindset.

Carol Dweck has stated that teaching people that their brain can change is a good starting point. Dweck also warns against praising a child’s natural ability or intelligence, as this can lead to a fixed mindset. In young children, a series of studies found that praising intelligence can lead to them giving up quickly after experiencing failure, a reduction in enjoyment, and even viewing effort as a something only needed by less able people.

There is still a lot of debate about how best to help someone develop a growth mindset. A lot of the research only measures short term impact. A recent study suggests that online programmes can deliver mindset interventions that are scalable across schools. As more research is conducted, we will no doubt learn the most effective ways to facilitate a growth mindset. In the meantime, here are six behaviours that we think might be worth praising:

How To Develop A Growth MINDSET 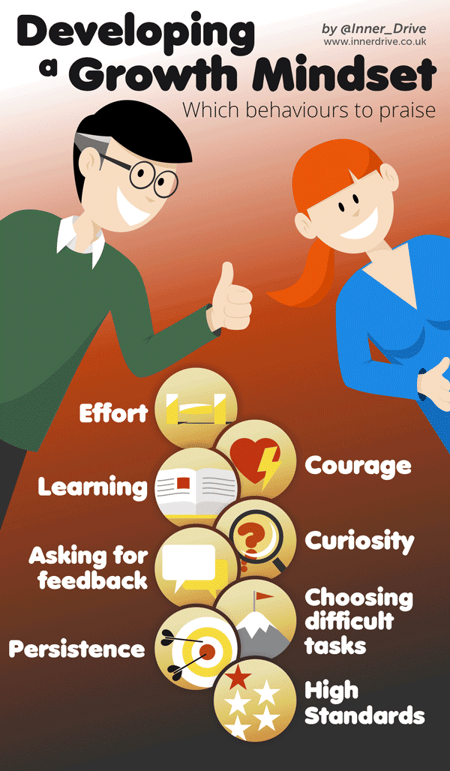 Effort – By focusing on the processes and effort that allow people to be successful, you give them a template to replicate next time. Praising effort has been shown to have a long lasting impact. In one study, children aged 2-3 who were praised for their effort were more likely to have a growth mindset five years later when aged 7-8. Furthermore, this type of praise has been demonstrated to enhance someone’s intrinsic motivation.

Different Strategies – In a recent interview, Dweck stated that 'telling kids to try harder isn't enough to promote a growth mindset'. One strategy that could work is advising them to ask metacognitive questions, such as, 'what could I do differently?'. This helps children avoid the trap of working hard but repeating the same mistakes.

Learning – Forty years ago, a psychologist in America studied how primary school students viewed an upcoming test. Some students viewed it as a chance to test how much they have learnt. Others viewed it as an opportunity to compare themselves against their classmates. Those who focused more on comparison are said to have an ego-orientation, whereas those who focused on learning are task-orientated. This work was the basis of some of Dweck’s early research. Task orientation has since been associated with better motivation, confidence, self-regulation, academic performance and reduced anxiety. Although this is probably common sense, where possible, try to foster a mindset that is focused on learning, development and improvement, and not just on outscoring a classmate.

Asking for Feedback – People with a growth mindset seek out and value feedback more than those with a fixed mindset. One possible reason for this is that those with a growth mindset see new events as an opportunity to learn new things, develop and challenge themselves; whereas, those with a fixed mindset see them as a test (and therefore judgement) against their ability. As well as giving someone feedback, the actual behaviour that should be praised is their seeking out this feedback. This will lead to them asking for feedback again in the future, which is a positive response to either success or failure.

Persistence – The ability to persist and overcome setbacks is seen by many as a key life skill. Many Olympic champions have developed this skill, and they attribute it as a key part of their success. Research indicates that those with a growth mindset will persist for longer. Research in America on 'Grit' (the definition for grit is long term perseverance and passion towards a singular goal) is in its early stages, but has been linked to success in school, university, military training and generally in life. We think this will be an interesting area of research to keep an eye on over the coming years.

Choosing Difficult Tasks – People with a fixed mindset equate making mistakes with having low levels of ability. This can lead to people playing it too safe for fear of looking bad. Over time, this leads to worse performance. Mistakes happen and they are inevitable. Learning is messy and never straight-forward. By encouraging someone to choose difficult tasks and stretch themselves, we think it will help them develop their mindset. This growth mindset could help develop a sense of both courage and curiosity: important life skills that extend beyond just getting good grades or playing sport better.

Setting High Standards – In a fascinating study of knowing your limits, researchers asked participants to cycle as hard as they could for 4000m. Later, participants were given the same instructions but were able to race against an avatar of their previous ride. What they didn’t know was that the avatar was actually going faster than their previous ride. The result? The participants rode alongside their avatar, riding significantly further than their previous maximal efforts. The implication is that people are poor predictors of their best efforts and, when pushed, may surpass their own expectations.