Why we do we procrastinate? Part 1

Why we do we procrastinate? Part 1

Every student has been there. Submitting the assignment one minute before is due, and promising to themselves “never again” as they breathe a huge sigh of relief.

And yet, they find themselves doing this with their next assignment, and the next, to the point that it’s affecting their overall well-being.

Why do they find it so difficult to motivate themselves? They’ll need to do the assignment eventually, so why not now? Every student procrastinates at some stage in their academic career, but when it becomes the norm (as it is for 50% of students), it’s problematic. This can not only negatively impact their mental and physical health, but it’s also associated with low academic achievement, declining grades, and low self-efficacy.

The verb ‘Procrastinate’ was originally derived from the Latin words “Pro” (In favour of) and “Crastinus” (tomorrow) but is more formally defined as the “avoidance of doing a task that needs to be accomplished”.

There are two main types of procrastinators: Active and Passive.

Despite a clear consensus on what procrastination is and its negative consequences, the reasons why we procrastinate is less clear. Researchers have failed to agree upon its causes, with some suggesting it has to do with poor time-management and others, with self-regulation. So why do we procrastinate? 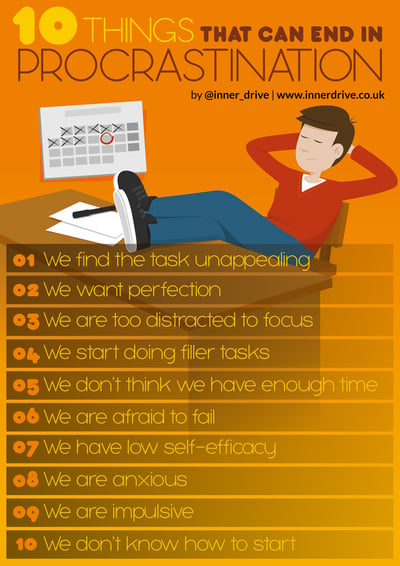 Why do we procrastinate?

The task is unappealing

One of the most common (if not the most common) causes of procrastination is struggling to complete tasks that we find unappealing or boring. No-one is getting excited to do laundry, pay their bills, or do that 2000-word assignment for their least favourite class - and yet they have to do it.

Research shows a strong link between procrastination and tasks we find aversive. The more boring or unappealing you find a task, the higher the chances you’re going to do your best to avoid it.

If you can relate to this, then try and do the task for 5 minutes. Once you start something, your brain remains alert until you finish it. Starting the task is the hardest part - once you get over that hurdle, everything will become easier.

Students often procrastinate on assignments out of perfectionism. This is because they’re either afraid of making a mistake which will open them up to criticism or worried that they won’t do as well as they normally do. The former causes them to push the assignment to the side until they can no longer ignore it, whilst the latter causes a never-ending cycle of editing and self-criticism.

However, it is possible for students to utilise their perfectionism as a tool against procrastination. Research shows that some people believe their high standards actually motivates them to complete their tasks on time.

To overcome these perfectionist tendencies, you need to acknowledge that you actually have them. Ask yourself why you have these standards, what you hope to achieve, and what the worst-case scenario could be. Spoiler: it’s not as bad as you think.

Starting with the easy task

Procrastination, for students, often looks like this: you sit down to start this really important assignment and all of a sudden, you find yourself making your bed or clearing out your desk. Who knew that organising pencils could be so fun? Perhaps you’ll do that really short homework assignment first because it’s quick and easy.

These are what we call “filler tasks” as we do them to fill the time, so we don’t have to do the task we need to. Whilst they make you feel like you’re being productive and give you a sense of accomplishment, it’s really just performative procrastination.

This is what is known as “Present Bias”: in a trade-off situation, we tend to settle for smaller rewards now rather than wait longer for bigger rewards. Essentially, we’d rather have £15 now than £20 in a week. But why?

Research shows that, when presented with the option of short-term rewards, the emotion-related part of the brain is activated. This part struggles to determine the future consequences of the choices we make now as it wants that quick dopamine rush that comes from finishing a task. As a result, waiting for a bigger sense of accomplishment from completing that super important tasks seems like too much hassle.

If a task seems really daunting, break it down into smaller sections and focus on one thing at a time. For example, you could see a 4000- word essay as drafting a plan, then writing the introduction, then the conclusion, then the first part… When you take this approach, you’ll realise that the task wasn’t as difficult as you initially thought, and you get to feel accomplished more often.

In modern-day life, students are surrounded by distractions: their phones, a TV, or social media just to name a few. These temptations that allow students to escape the reality of their assignment-riddled life can lead to procrastination.

Research shows that after being distracted, it takes around 25 minutes to get back to focusing on the task at hand. So, that quick 2-minute Instagram scroll? It’s really a 27-minute distraction.

And as much as we like to tell ourselves that we can focus on many different things at once, the reality is that multi-tasking is just switching between tasks quickly, wasting energy, focus and time in the process. Similarly, research shows that simply having your phone next to you (even without touching it) whilst trying to study was enough to cause a decline in performance on a range of cognitive tasks.

If this is something you struggle with, you may have high levels of distractibility. To overcome this, remove potential temptations from the room where you work, block certain websites, or even download the ‘Forest’ app so you can grow a tree whilst studying.

The most common excuse amongst procrastinators is “I don’t have the time”. Deadlines keep appearing and there is no end goal in sight. Some researchers even argue that procrastination is nothing but poor time-management. However, the reality is not that simple.

One typical trait of procrastinators is a tendency to miscalculate how long a task will take and may put it off thinking it will be a lot more complicated and time-consuming than it actually is. But this is only one end of the spectrum.

Teenagers actually view time differently compared to adults because of their age. To them, time moves more slowly. To a 16-year-old, a year is 6.25% of their life, whilst the same time frame represents 2.5% of their life to a 40-year-old. This can cause students to think they have more time to complete a task than they actually do.

This phenomenon is known as the “The Planning Fallacy”, which is when people (particularly students) find it difficult to accurately predict how long a task will take, often leading to them putting off the assignment until the last minute. One study found that over 70% of students finished their assignment later than they had predicted they would, with the average time taken being over 55 days compared to the average prediction of 34 days. Students: give yourself more time than you think and set regular, short deadlines.

The concept of procrastination is very complex. There is a multitude of reasons why students may procrastinate, which can rotate on different tasks. What drives a student to procrastinate is very dependent on who they are as an individual and how they justify putting off work to themselves.

The first step to overcoming procrastination is to recognise you have a problem with it. Then consider why you engage in this self-handicapping behaviour, and what you can do to change your habits.

We explore even more reasons why we procrastinate (and how to deal with them) in part 2 of this blog series - click here to read it.

For more tips, advice and strategies on how to help students avoid distracting temptations, check out our blogs on Minimising Procrastination.