The negative impact of mobile phones: research around the world

The negative impact of mobile phones: research around the world

Globally, there are 6.378 billion smartphone users around the world today — around 80.69% of the population. Smartphone use can be hard to manage, especially for students, and research shows that there are many reasons to put your phone away. One study even found that students who just study in close proximity of their phone found it much harder to concentrate, even if they weren’t using it. Other research has highlighted how smartphone usage can lead to low sleep quality, increased stress and reduced concentration.

Schools may have three main concerns around mobile phones, which typically are:

THREAD: there is a growing body of evidence to show that mobile phone use is linked with lower academic achievement, a decrease in wellbeing and can often facilitate bullying in schools. Here's some of the available evidence.

Inspired by a brilliant thread by teacher and author Carl Hendrick, we’ve examined some of the research from around the world to look at the negative impact that mobile phones can have. Here is what these studies have found… 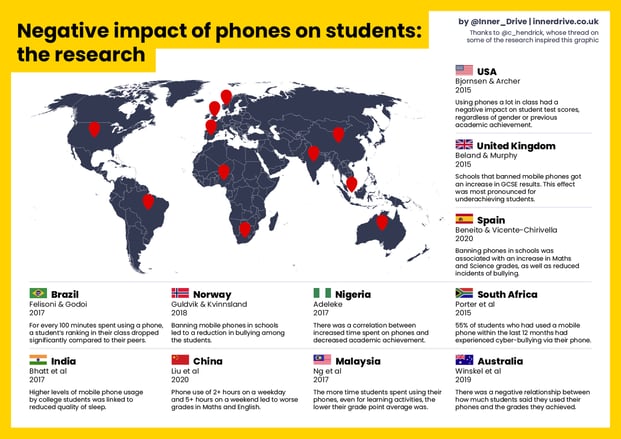 There are many ways to get better grades, and banning mobile phones in schools may be one of them. One study tracked schools for a number of years about their mobile phone policies in four different English cities: Birmingham, Leicester, London and Manchester.

They found that introducing a mobile phone ban in schools increased students’ GCSE scores, especially for lower-achieving students. The results suggest that schools could significantly reduce the academic attainment gap across students by implementing a mobile phone ban.

In the USA, one study specifically examined the relationship between how much students use their phones in class (be it for social media, texting, searching relevant information online, playing games and/or updating their calendars) and their grades.

Results of this study show that there was a significant negative association between mobile phone use during class time and the students’ grade point average. This suggests that when students spend a lot of time on their phone in class, their learning and academic achievement may suffer.

Another study from America found that moderate use of mobile phones (4 hours per day) was also associated with lower psychological well-being. For high users (7+ hours per day), they were more than twice as likely to:

Researchers in Brazil tested the relationship between smartphone use and academic performance. They used an app to measure phone use and a survey to measure participants’ personal information, self-efficacy while learning, and phone usage perception.

Results suggest that there is a significant relationship between a greater total time spent using smartphones and a lower academic performance. They found that for every 100 minutes spent using smartphones, students’ ranking at their school fell by 6.3 points. This effect is twice as high when the smartphone is used during class time instead of during free time or the weekend.

Research has also looked at the impact of mobile phone uses on academic performance by doing a comparative case study in two regions in Spain, Galicia and Castile-La Mancha. In Spain, autonomous governments of these two regions established mobile phone bans in schools as of 2015.

The mobile phone ban significantly reduced bullying among students, particularly among those aged between 12 and 17. The phone ban also resulted in an increase in student test scores in Mathematics and Science.

Another study from Spain found that excessive use of mobile phones was bad for students’ psychological health, with constant over-use being associated with high levels of anxiety, reduced self-esteem and feelings of loneliness.

Norwegian schools have implemented a wide range of phone policies across schools, including mobile phone bans in some. One study investigated schools across the country about their opinions and policies on mobile phone use at school. They found that schools that supported a mobile phone bad reported significantly less incidents of bullying amongst their students.

In an ideal world, smartphones could be adapted to improve learning, but they must be adapted in a way that makes them tools to help rather than hinder students’ academic achievement.

Researchers surveyed and interviewed students, from urban high-density neighbourhoods to remote locations across South Africa. Both teachers and students stated that they used their phones to support their work and learning, but 61% of students believed that there were downsides to phone use in the classroom. These included:

Sleep is vital to maintaining focus, enhancing memory, and improving cognition, but mobile phones may affect its efficacy. Researchers studied the level of mobile phone dependence and sleep quality of university engineering students in India.

The research found that students were significantly more likely to report poor academic performance and scored significantly lower on mathematics and English when they used their phones for:

The extent to which mobile phones can support student learning is another area of interest for researchers. In Malaysia, one study looked specifically at the effects of using of mobile phone use to support academic learning on students’ compound GPA.

Students reported that their smartphone use in class included:

Researchers found that the more students used their phones, even if it was to support school learning, the lower their compound GPA.

So, there you have it: research across the globe from a range of study designs have found that there can be a significant negative impact on students using their mobile phones. These range from hindering academic performance, increasing rates of bullying, decreasing well-being and reducing sleep quantity and quality.

But we all know that smartphones are not going away anytime soon. The question now remains to see:

We should be under no illusions. There is absolutely a mobile phone addiction crisis sweeping the world. Do we really think students need more screen time when they are at school? That is for each institution to decide themselves.

But that decision shouldn’t be rushed — the research should be consulted and their application greatly considered first. 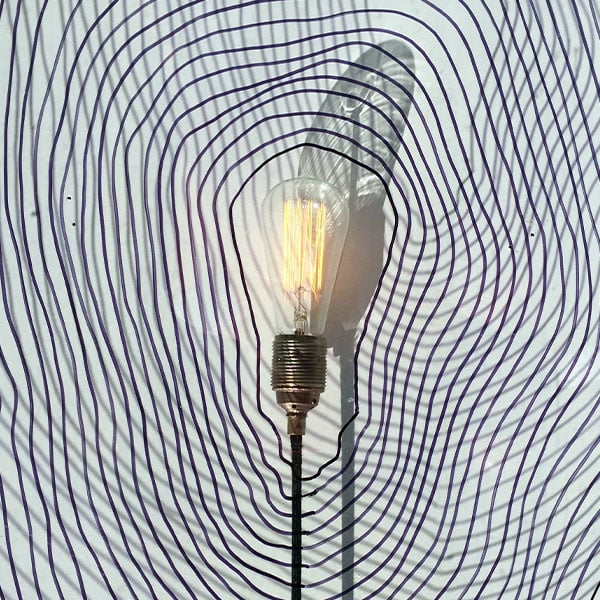