Why do Teenagers Get Wet in the Rain?

Why do Teenagers Get Wet in the Rain?

Recently, we were delivering a CPD session for teachers. As we were going to leave, a storm started. Waiting for the rain to pass, one of the teachers commented that her students had a curious relationship with the use of umbrellas. She noted that year 7 students used them, as did sixth form students. However, students in the intervening years often refused to do so. Why would this be the case? The answer may lie in research from psychology and neuroscience.

The teacher commented that Year 7 students used an umbrella because they were told to. Sixth form students, she suggested, would do so as they wanted to maintain their appearance and look good. However, students from Year 8-11 would go without them. Even if they had an umbrella with them they would refuse to use it if their friends didn’t have one. They would prefer to get wet and be part of the group. Essentially, the graph of umbrella use would look something like this: 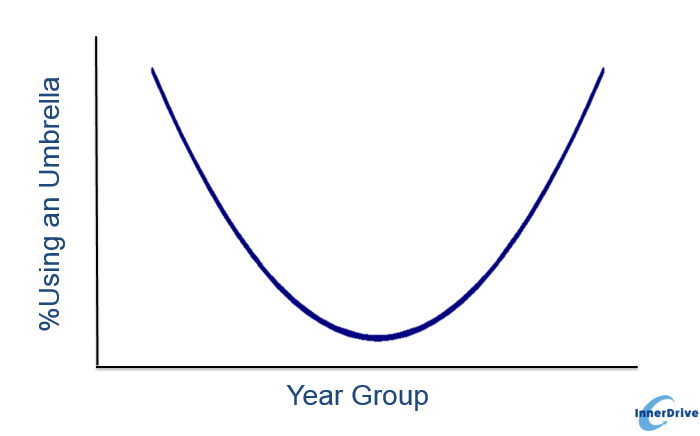 What is happening here? Well for one thing, we know that teenagers like to take more risks than adults. One recent study asked people to rate how much they like to do frightening things. The differences in responses between the age groups is shown below: 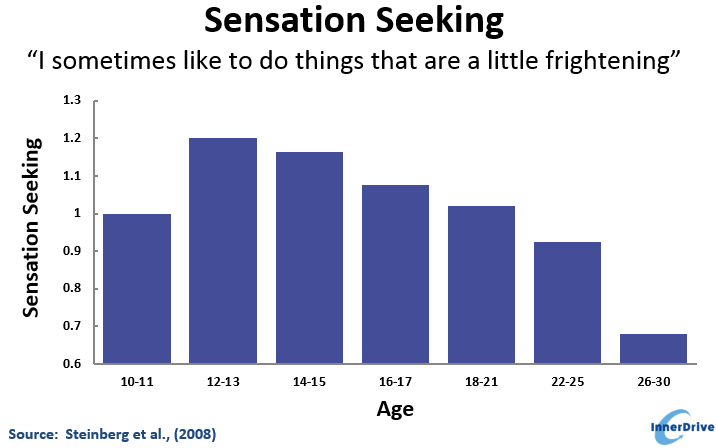 So teenagers want to take more risks (especially year in Year 8, 9 and 10). But that is not the whole story here. The comment about teenagers not using their own umbrella was noted when the pupils were with friends who did not have an umbrella. Basically, they had a strong desire to fit in with the group.

What does the research say about the effects of peer pressure and wanting to be part of the group during adolescent years? One study found that teenagers are very susceptible to the feelings that are associated with social exclusion. These researchers found that something as simple as being excluded in an electronic game with strangers has more impact on teenagers’ mood than it does for adults. For more information, check out our blog about Fear Of Missing Out (FOMO).

Likewise, another study found that when completing a driving simulator game, teenagers were far more likely to make risky decisions if they were in the car with someone their own age than compared to adults. 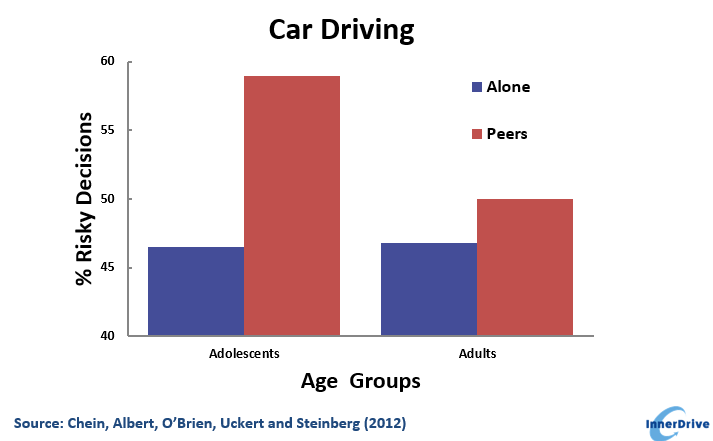 So there you have it. Teenagers want to take more risks. This effect is magnified when part of a group, even when they know that it may be an unwise decision. So don’t be surprised if teenagers get wet in the rain. Even if they have an umbrella.

For more information on how the teenage brain is different, and how to best work with teenagers, read out blog on Understanding the Teenage Brain.

Mindset and Mental Health: Interview With an Expert END_OF_DOCUMENT_TOKEN_TO_BE_REPLACED