When should students review what they've learnt?

When should students review what they've learnt?

Learning has recently been described as a change to one’s long-term memory. However complex that might sound, we now fortunately know more than ever before about the science of learning.

A growing body of research has found that, counter-intuitively, the act of almost forgetting something is key to helping students improve how much they know. So, when should students review what they have learnt?

The importance of Spacing

Spacing is a learning technique that involves students regularly revisiting and reviewing information that they have previously learnt. It is the opposite of cramming, which involves trying to learn and remember lots of information in one go. By allowing themselves to almost forget material before re-learning it, the content is cemented and solidified deeper in a student’s long-term memory.

How long should the space between revisiting material be?

This improved performance was seen for both factual (i.e. basic recall) and higher-level questions (i.e. applying old information to new contexts), such that there was a 15% and 20% improvement for the eight-day condition over the one-day condition respectively.

Other research has also proved spacing to be an effective technique. This particular study confirmed that the optimum gap students should leave before revisiting previously learnt material depends on how far away a test is. The researchers offered the following guidelines:

How to Use Spacing Effectively in the Classroom

The above research demonstrates spacing to be an effective technique that can easily be employed by teachers in the classroom. Teachers may consider reviewing taught material with their students after 8 days or potentially even later, depending on how far away the associated exam is. It may also be helpful to follow up review sessions with a low stakes test a couple of weeks later, as this can help to further cement information in the long-term memory.

Other strategies that we think are worth mentioning include:

The Leitner System is a good way to implement spacing. In order to use this strategy, students need flashcards based on the topics they wish to revise and a box that can be split into five different compartments, labelled 1-5. Originally, all flashcards should be placed in the first compartment. Each time a flashcard is answered correctly, the student should move it into the next compartment, which they will review less often than the previous one. However, if the flashcard is answered incorrectly, it has to be moved back to the beginning (i.e. compartment 1), which they should review daily. This process continues until all the flashcards end up in box 5.

If this explanation above doesn’t make the Leitner system clear to you, take a look at our handy graphic to help aid your understanding: 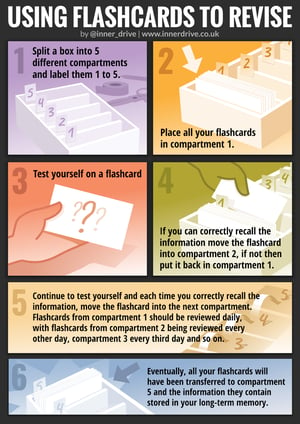 Whilst spacing looks at how long students leave between revision sessions, interleaving looks at how they organise their revision. Interleaving involves students mixing up their topics within a subject. The reason this works is that it prompts students to actively select the right strategy and make links between what they are studying and what they already know.

As modular exams no longer exist, a student’s ability to be able to retain large amounts of information all at the same time has become increasingly important. Therefore, it is essential that teachers help their students by giving them regular opportunities to review previously learnt information, preferably at a time when they are close to forgetting it, as this allows for stronger memory traces to be created.

Students do also need to take responsibility for their learning and ensure that they avoid convincing themselves that they have successfully learnt information because they can recall it an hour later. They could instead check to see if their recall is still accurate many days later.

How to help students form new habits
How to give Wise Feedback
Do interactive whiteboards increase student engagement?
Cognitive Load Theory: the basics
Unhelpful revision thinking (and how to overcome it)

Research says this is the key to happiness END_OF_DOCUMENT_TOKEN_TO_BE_REPLACED