What we can Learn From Chess Grandmasters

What we can Learn From Chess Grandmasters

The Chess World Cup is on in September. Becoming a ‘grandmaster’ is one of the greatest titles that a chess player can be awarded. So, what separates the grandmasters from ordinary chess players? And most importantly, how can these findings be applied to help develop better students and athletes?

There Are No Shortcuts

The process of becoming a grandmaster is so long that many people pursuing the title eventually give up. One study found that, on average, it takes over 740 games for a chess player to have a chance to become a grandmaster. This demonstrates the importance of patience and persistence; this is important to remember in school and in sport, when sometimes it can feel like we are putting in a lot of effort without making much progress.

However, there are no guarantees: 40% of the participants in the study did not reach grandmaster status despite playing over 740 games. Balancing optimism and self-belief with rational and realistic ambitions is important.

Why does it take over 740 games? That seems to be enough time for people to make enough mistakes and to learn from them. It seems that if you haven’t learnt from your errors within that time, you are likely to keep repeating them. It would seem that the grandmasters are the ones who have learnt how to fail better than the 40% who don’t make it.

Interestingly, it was discovered that for the younger participants the number of tournaments was more important than deliberate practice, highlighting the need to gain experience when starting out.

So how does this compare to other domains? The most comprehensive and thorough review of the research on deliberate practice, which included almost 90 studies and over 11,000 participants, found that it accounted for 21% of variance in musical ability, 18% of variance in sporting performance and 4% for academic success. To read more about deliberate practice, read our blog on ‘How to Maximise Training’.

‘Chunking,’ is a process used by many expert chess players, which involves breaking information down into smaller parts and interlinking them to form a more familiar and meaningful whole. One study on a group of chess experts, namely grandmasters and class A chess players, found that all of the experts used the chunking process. However, the grandmasters were superior in their chess ability because they were able to break information down into a smaller number of large chunks.

Chunking is not restricted to chess – it can be used by anyone in any scenario which involves memory.  For more advice on how to improve memory in school, see our guide on ‘The Best Ways to Revise’ and how to ‘Harness The Testing Effect’. 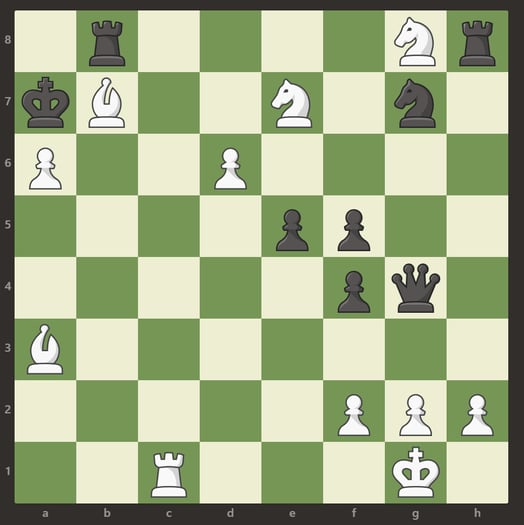 Checkmate Puzzle: It is white to move and checkmate in 1 move.

Certain personality traits and psychological skills are a good predictor of a person’s ability in a particular domain. A study in 2006 found that stronger chess players were better at controlling their emotions and managing their concentration levels..

The ability to manage your emotions and control your focus is something that can be taught, learnt and developed. For example, research suggests that concentration can be improved by eating breakfast, regular drinking of water, having regular breaks, getting fresh air and caring about the task you are doing. Likewise, anyone can improve how they react under pressure, with effective strategies to manage nerves and anxieties including a more helpful and constructive self-talk, positive imagery and reframing threats as opportunities. This can be done by focusing on what you stand to gain from a situation, rather than what you stand to lose.

A lot can be learned from chess grandmasters, because they either are or have been at the very top of their given domain. The most important finding to take away is that to reach the very top of any field, it takes a long time. The saying ‘success does not come overnight’ really is true. Regular deliberate practice, developing self-regulation, patience and persistence are all necessary for success at a high level.

If you enjoyed reading this, we think you'll love our blog on How to Improve Concentration. Check it out!

We would like to thank Will Brookman for his help and contribution on this blog. He is awesome.

6 Ways That Failure Can Help END_OF_DOCUMENT_TOKEN_TO_BE_REPLACED