What schools can learn from the Pepsi taste test

What schools can learn from the Pepsi taste test

Why do students appear to sometimes make really bad decisions about their revision? Is there a difference between what you want and what you need? The answer may be found, surprisingly, in one of the most famous marketing campaigns ever...

In the 1980’s, Pepsi launched a pioneering advertising campaign to dislodge Coke from their number one “soda-spot”. The advert showed that in a blind taste test, consumers preferred a sip of Pepsi vs a sip of Coke.

Coke panicked. At great cost in terms of time, effort and money they reformulated their original recipe to compete in taste tests with Pepsi. Sales plummeted and Coke’s consumers were furious. Eventually, the old flavour was brought back.

In hindsight, Coke didn’t need to do anything. It turns out that people only preferred a sip of Pepsi because it was sweeter. But it was too sweet to drink a whole bottle of, so people continued to buy Coke instead. This is a great example of the difference between what people think they like and prefer and what they actually want in the long run.

How can this relate to students?

There are many examples of students confusing their initial preference with what is actually best for them. We will look at three distinct but related areas:

How do you want to revise?

As well as comparing final exam results, the researchers compared how much the students enjoyed their revision sessions and how much they felt it helped them. The results? The least popular methods were actually the best for exam performance, and vice versa. 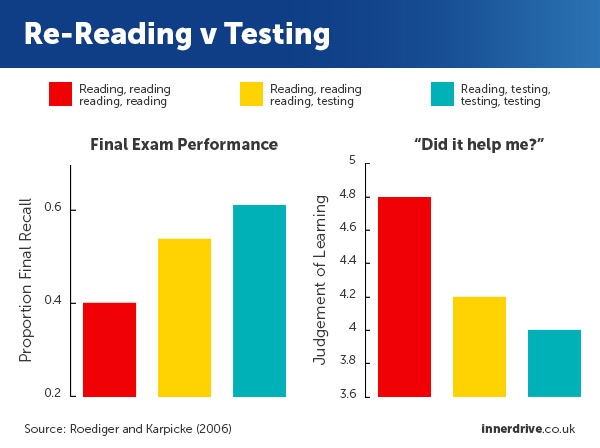 If students could choose their own deadlines, would they opt to space them out evenly over the course of the year or hand everything in on the last day of term? Keen to find out, researchers presented students with this exact choice. Unsurprisingly, many students opted to hand in their entire work right at the end. As a result, they got significantly lower grades than their counterparts who had regular deadlines set for them.

Does Your Learning Preference Help?

Despite its popularity, the myth that teaching someone in a way that matches their learning style (i.e. visual, auditory or kinaesthetic) is just that - a myth. It has been confirmed as such by pretty much every reputable psychologist with knowledge of the research. One of the widest ranging and most thorough reviews not only found no evidence to support this, but that there are several studies that found the exact opposite: teaching someone in a way that matches their preference leads to no learning benefits. Read more about this and other common thinking biases in education in this blog.

So, there you have it. What someone thinks they want is not always what’s best for them - and that is certainly true of students. Just because something might seem easier, more fun or relaxing in the short term, doesn’t mean it is best for your results in the long term. In fact, their preference may actually be harmful. This is true for revision techniques, setting deadlines and learning preference. And if, as an educator, you help enforce better ways, students will thank you for it later in life.

A recent study highlighted by The British Psychological Society may offer a way forward. They found that the best way to help students maximise their focus during revision time is to not make the level of the task too easy or too hard. A sort of goldilocks sweet spot that is just right. It might not be what they like, but it will be what is best for them.

We have lots more resources on revision available, covering other ideas on how to improve focus and concentration, so check out our Best Ways to Revise page for more information.

How the world views teenagers END_OF_DOCUMENT_TOKEN_TO_BE_REPLACED