Have you heard about the Production Effect?

This little known but vitally important area of research may hold the key to why some students remember more of their revision than others. It’s simple, evidence based and very effective. Here’s a quick rundown…

What is the Production Effect?

The research behind the Production Effect

A notable study found that reading words out-loud is more effective than reading them in silence. This is because the learner produces more from the content as they see, say, and hear themselves saying the words.

Why is the Production Effect effective?

Students should look to use the production effect when revising, as it allows for studied material to be retained for a much longer period of time.

The production effect is thought to lead to an improvement in the memory of information, because translating content from one modality to another (e.g. from a visual form to an auditory form) enhances its distinctiveness. This subsequently increases the likelihood of it being successfully transferred to the long-term memory store.

Examples of the Production Effect 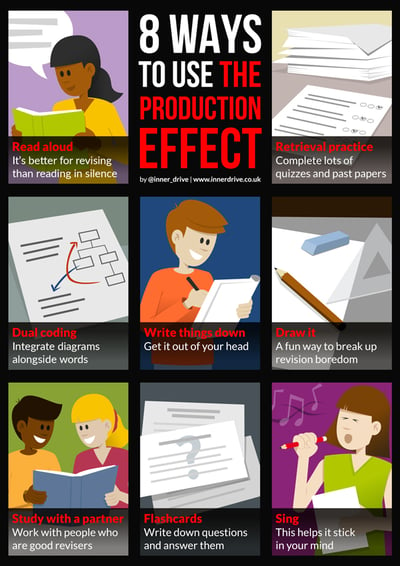 The production effect is found anytime we do something with the information we use. Examples of this include:

The production effect helps students learn because it prompts them to think harder and for longer about the material that they are studying. As well as teaching them how to revise, it is also worth noting that educating students about common revision mistakes is beneficial. These include:

Recent research has found that 86% of students re-read their notes when revising, whilst 55% claimed this was their number one strategy. However, re-reading has been shown by countless studies to be an ineffective revision strategy, because it doesn’t encourage students to consider nor process the information they are reading.

Cramming at the Last Minute

Just like athletes shouldn’t leave all their training until the day before the event, students cannot perform to their maximum if they try and cram all their revision into the last few days before an exam.

Cramming is the opposite of spacing, which has been found to help boost students’ exam results by 10 to 30%.  If students space out their revision, they give themselves time to forget previously learnt information, meaning that when it is re-visited and re-learnt stronger memory traces are created.

Many students believe that they can multi-task, hence they can revise effectively whilst also using their phone.

However, multi-tasking is a myth; research has shown that the mere presence of a phone can cause a 20% decline in task performance. This is also one of the reasons that students who listen to music while revising tend to do worse in their exams.

Not all revision strategies are equal. Those that can be done on autopilot decrease the likelihood of being remembered later on.

By utilising the production effect (that is producing something with the key material), students are more likely to engage with the topic and as such think deeper about the content. As a result, their learning, performance and exam results will increase.