The Benefits of Taking a Short Walk

The Benefits of Taking a Short Walk

Freidrich Nietzsche once said that “all truly great thoughts are conceived by walking”. Indeed, Thomas Jefferson said it was “the greatest exercise you could get”. But what is the research behind the benefits of taking a short walk? And more importantly, can we use this to encourage our students to do so more?

A recent study found that people who went on a short walk, even for just 12 minutes, had an increase in happiness, attentiveness and confidence. Does it matter where you go for a walk? Probably not. The participants in the study had the positive benefit of their walk regardless of if they did it outside, in a gallery or on a treadmill. What was particularly interesting about this study was that students still felt better after the walk, even if they knew they had to do something daunting (in this case, write an essay).  This could be particularly useful and valuable for students in the build up to exams. 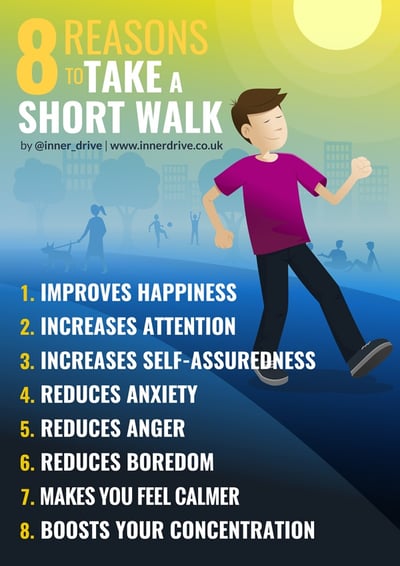 Researchers at Bristol University have found that people perform significantly better if they exercise during their lunch break. As well as improving their mood and ability to deal with stressful situations, the scores for their perceived concentration levels were 21% higher on days that they exercised.

A fascinating study found that, upon returning from a short walk in a field or a park, students performed up to 20% better on a boring task compared to those who had completed it in a busy urban environment. This is because going for a walk in a natural environment replenishes your brain, whereas urban ones require your brain to stay alert, further draining your mental resources.

A recent study tested the impact that exercise had on learning. Researchers split participants into three groups; those that exercise straight after revision, four hours after and those who did no exercise. They found that the ability to retain and recall information was significantly improved in the group that exercised up to 4 hours after their lesson. Further investigation using MRI scans found that the area of the brain largely responsible for memory, the hippocampus, was very stimulated, especially compared to those who had not exercised. The finding seems consistent with other research, which found positive benefits of exercise and memory for both children and adults.

Constantly engaging in exercise over your lifetime has been found in both animal and human studies to improve cognitive functioning and brain plasticity, which is the ability for the brain to change and grow over time. This leads to a reduction in the risk of getting Alzheimers or Dementia. A recent study examined the difference in the cognitive performance between individuals who engaged in physical activity in their leisure time and those who did not. When these participants were tracked after five years, the researchers found that regular exercisers performed better in cognitive tests.

It’s easy to be put off exercising with perceived barriers, such as feeling too tired to exercise, often being cited. However, physical activity can actually help combat fatigue and doesn’t have to be organised sport (e.g. gym classes or walking).

A study from the University of Georgia randomly assigned 36 young adults, who reported persistent fatigue, into a moderate-intensity, low-intensity or no exercise groups. Over a 6 week period it was found that individuals who were part of either exercise groups reported less fatigue and more energy than those who did not exercise.