#5 The One About Growth Mindset

#5 The One About Growth Mindset

Growth Mindset is arguably the most popular psychological theory in education at the moment. Its research has spawned many assemblies and form tutor-time activities. This blog looks at the seminal growth mindset study from almost twenty years ago that really launched the theory into mainstream consciousness.

Writing in The Journal of Personality and Social Psychology in 1998, Claudia Mueller and Carol Dweck from Columbia University explored the consequences of how different types of praise affected the students. This research paper is actually a combination of six separate studies.

In each, students aged 9-12 years old completed a problem-solving game and were then told that they had got 80% of the questions right and were praised for either their natural intelligence or how hard they worked on the task. The results of the study report how the students felt, thought and behaved in subsequent tasks. 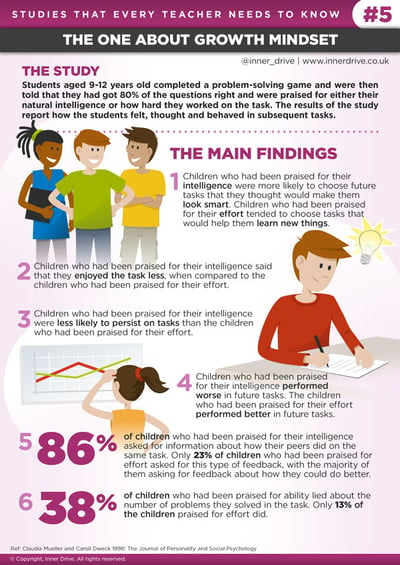 #6 38% of children who had been praised for ability lied about the number of problems they solved in the task. Only 13% of the children praised for effort did.

In the intervening years since this study, some researchers have struggled to replicate these findings. However, other researchers have found that having a growth mindset is associated with a range of other consequences. These include an increase in ability to cope with transition, self-regulation, well-being, learning orientation, grit and pro-social behaviours, whilst also reducing stress and aggression. The majority of studies also found that students with a growth mindset go on to achieve better grades.

This problem highlights the complexities and importance of how we deliver feedback. Too much praise can lead to narcissistic behaviour and create a culture of low expectation. The problem with praise such as ‘you are so clever’ or ‘you must be so talented’ is that it does not tell students what they need to do next time to be successful. By praising their effort and/or the strategies they used, we give students a template of behaviours that they can follow next time.

As the authors of the study noted, “children exposed to this intelligence feedback, with an emphasis on proving ability through high performance, were likely to respond negatively when they faced achievement setbacks…children given effort feedback, on the other hand, who valued learning over performance, were understandably less likely to fall apart when they experienced an isolated low performance.” Studies like this must make us consider the merit of calling certain students ‘gifted and talented’, as it implies to them that it is their gifts and talents that will make them successful, not what they do with them.

A recent survey found that 98% of teachers believe that if their students have a growth mindset it will lead to improved student learning, but only 20% of them believe they are good at fostering a growth mindset and 85% want more help developing practical strategies. We can help.

Reference: Mueller and Dweck, 1998, The Journal of Personality and Social Psychology

#11 The One About ... Parents and Grades END_OF_DOCUMENT_TOKEN_TO_BE_REPLACED