#21 The One About... Teacher Rating and Learning

#21 The One About... Teacher Rating and Learning

How can you measure how good a teacher is? Some use metrics such as ‘value-added’, some do it by lesson observation, and some ask the students to rate their teacher themselves. This latter method of teacher rating, seems to be increasingly popular, with websites such as ‘Rate My Teacher’ appearing online as well as reports that some schools use students like a ‘mystery shopper’ to report back on teacher quality.

So, does student evaluation of a teacher bear any relation to how good that teacher actually is? Most students will have a favourite teacher, but is this based on who they like the most rather than who helps them learn the most? This would mean that student ratings of teacher effectiveness were more akin to a popularity contest than anything else.

Eager to answer this question, researchers from Mount Royal University in Canada ran a thorough review of the existing studies in this area and published their findings in 2017 in the journal Studies in Educational Evaluation. As well as re-analysing previously reported reviews, they also added the most up to date studies in their evaluation. 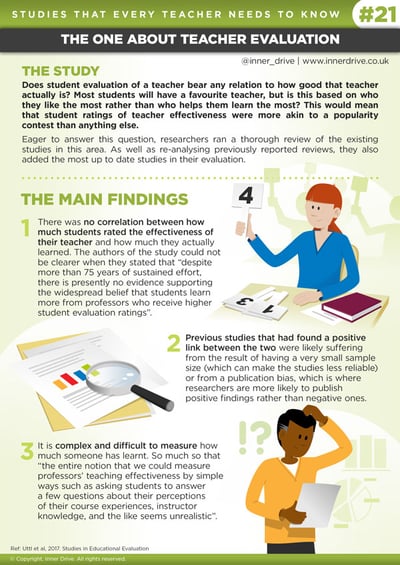 They found that there was no correlation between how much students rated the effectiveness of their teacher and how much they actually learned.  The authors of the study could not be clearer when they stated that “despite more than 75 years of sustained effort, there is presently no evidence supporting the widespread belief that students learn more from professors who receive higher student evaluation ratings”.

Furthermore, they suggest that previous studies that had found a positive link between the two were likely suffering from the result of having a very small sample size (which can make the studies less reliable) or from a publication bias, which is where researchers are more likely to publish positive findings rather than negative ones.

The researchers highlight how complex and difficult it is to measure how much someone has learnt. So much so that they state that “the entire notion that we could measure professors’ teaching effectiveness by simple ways such as asking students to answer a few questions about their perceptions of their course experiences, instructor knowledge, and the like seems unrealistic”.

Other research has explored why some students rate their teachers as more effective than others. Two main factors might be at play here. The first is that one of the strongest predictors of how students rate their teacher is the level of prior interest that those students had in the subject. Simply put, if we like a topic a lot, then we are more likely to rate the person teaching that topic as very good. The reverse is also true, as most students don’t tend to like the person who makes them work hard at the subject they don’t like.

The second factor around student evaluation may be a sense of confirmation bias. In previous studies, students received a brief biography of a supply teacher which were identical except for one detail. Half the students read that this teacher was ‘warm’ and the other half read that they had a ‘cold’ personality. At the end of the lesson, students who had been primed to think of their new teacher as warm were more likely to rate them as such, whereas those who had been conditioned to think of them as cold were more likely to rate them as being distant and aloof. It seems that teachers reputations often precede them, strongly influencing how the new cohort think and feel about them.

The authors of the studies state that universities and colleges focused on student learning may need to give minimal or no weight to student evaluation ratings. This is not to say that the student voice is not important. How students feel towards their studies and the beliefs they have about those teaching must be heard, they just shouldn’t be an important criteria for measuring how effective their teachers are. If educational institutions really want their students rating their teachers as effective, creating a love and passion for the subject seems to be one of the best ways of doing so.

#17 The One About ... revising to music END_OF_DOCUMENT_TOKEN_TO_BE_REPLACED