#20 The One About... Effort Being Contagious

#20 The One About... Effort Being Contagious

How do we get students to work a little bit harder? What impact does the person next to you have on how hard you work? And finally, if they are working hard, does that encourage you to do likewise?

Researchers Kobe Desender and Eva Van den Bussche from universities in Hamburg and Brussels recently sought to answer these questions. They had thirty eight students perform a reaction time game on a computer in pairs. Sometimes the tasks were on the same screen, sometimes they were on different screens next to each other. Some of the time they could see what their partner was doing, and sometimes they couldn’t.

The researchers manipulated the game so that one of the pair had a harder task, which forced them to work harder. They then measured what impact this had on the other member of the pair. 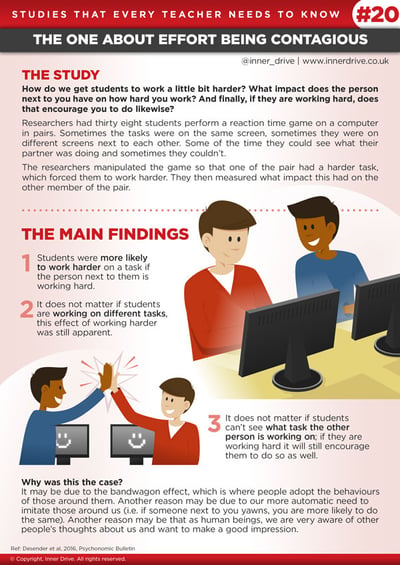 Why was this the case? It may be due to the bandwagon effect, which is where people adopt the behaviours of those around them. Another reason may be due to our more automatic need to imitate those around us (i.e. if someone next to you yawns, you are probably likely to do the same). Another reason may be that, as human beings, we are very aware of other people’s thoughts about us and want to make a good impression.

One of the first studies ever conducted in sport psychology over one hundred years ago found that people would cycle faster on a bike machine if they were being observed by others. Building on this, other research found that if done in front of others, skills that were either simple or well learnt were performed better.

However, it is not all straight forward. A fascinating study found that for each person added to a tug of war team, each member put in less effort. This is known as ‘social loafing’ and is often caused by believing that other people will compensate and pick up the slack. This seems to be distinct from this study, as it revolved around group members working towards the same task, whereas this one focused on students achieving on individual pieces of work.

Other research has emerged that suggests that when given the choice, people will choose environments that do not require them putting in high levels of effort. Our default setting seems to be one of preserving energy, not expanding it.

This has some interesting implications for where children sit in the classroom. This means not letting students always choose who they sit next to, but instead pairing students with someone who will encourage them to work hard. The person they like the most may not be the person who helps them work at their best. As the authors of the study succinctly put in their conclusion, “simply performing a task next to a person who exerts a lot of effort in a task will make you do the same”.

#19 The One About Parental Praise END_OF_DOCUMENT_TOKEN_TO_BE_REPLACED