#19 The One About Parental Praise

#19 The One About Parental Praise

How important are the early interactions between a parent and their child? What can parents do to best help their child develop a positive learning mindset later on in life? To answer these questions, researchers from the University of Chicago and Stanford University ran a fascinating study over a number of years.

They observed the interactions of 53 children aged 1-3 years old and their parents over a three year period. During these interactions, the researchers observed and recorded the amount of praise parents gave to their children, and categorised it as either ‘process praise’ or ‘person praise’.

Process praise focused on the child’s effort and strategies, such as “you must have tried really hard there”, or “I really liked how you did that”. Person praise was defined as praise that centered around a fixed positive quality, such as “you’re so smart” or “good girl”.

Several years later, when the children were aged 7-8 years old, the researchers returned to ask the students about their attitude to learning and what motivates them. They then compared the type of praise that the children had received years before to see if there was any correlation. 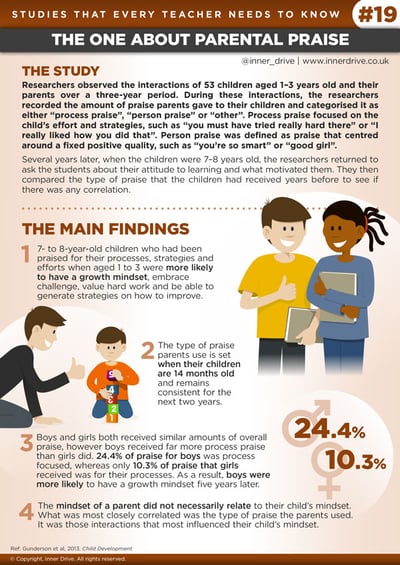 #1 When they were 7-8 years old, children who had been praised for their processes, strategies and efforts when aged 1-3 were more likely to have a growth mindset, embrace challenge, value hard work and be able to generate strategies on how to improve.

#2 The type of praise parents use is set when their children are 14 months old and remains consistent for the next two years.

#3 Boys and girls both received similar amounts of overall praise, however boys received far more process praise than girls did. 24.4% of praise for boys was process focused, whereas only 10.3% of praise that girls received was for their processes. As a result, boys were more likely to have a growth mindset five years later.

#4 The mindset of parents did not relate to their child’s mindset. What was related was the type of praise the parents use. It is these interactions that most influence their children’s mindset.

Several other studies suggest that praising someone for their effort and strategies is likely to help them develop a growth mindset and belief that they can improve. This is because new strategies can be learnt and acquired, thus promoting a resilient mindset during adversity.

Other studies have looked to examine the relationship between parental mindset and child’s mindset. These confirm the findings from this study that the two are not related. What these other studies have confirmed is that parental behaviours and reactions matter more than their actual mindset. One study, for example, found that how parents react to their child’s setbacks has a significant impact; with those who view it as an opportunity to learn and improve, rather than as a negative judgement on ability, being more likely to have children who have a growth mindset.

In this study, the finding that boys receive more process praise, and are therefore more likely to have a growth mindset, is an interesting one, as the results from other studies are mixed. Some report no difference between boys and girls in terms of having a growth mindset, whereas other studies have found that girls are more likely to attribute failure to fixed factors rather than ones that they can change. Some research has also looked at subject specific mindset, they have found that the belief of a fixed ability in maths and science is more apparent in young girls than in young boys.

The authors of the study note that “our findings are consistent with the idea that variation in parent praise can impact children’s motivational frameworks and that the roots of this impact can be traced back to the toddler years”. This would seem to suggest that early education for parents on the impact of the type of praise they use with their children at a young age would be very helpful.

What is also interesting is just how important this parental praise is. Commenting on this, the authors also say that “given that children are likely to receive praise from many adults in their environment, it is remarkable that praise occurring during the thin slices of parent-child interactions [that they observed] provided insight into how children develop [a growth mindset]”. Clearly, prioritising parental praise is a good strategy.

#18 The One About the Dunning Kruger Effect END_OF_DOCUMENT_TOKEN_TO_BE_REPLACED