#18 The One About the Dunning Kruger Effect

#18 The One About the Dunning Kruger Effect

In 1995, McArthur Wheeler robbed a bank in America in broad daylight. He was surprised later when he was arrested, as he incorrectly believed that covering his face in lemon juice would make him invisible to the CCTV cameras. Inspired by not only his incompetence, but also his lack of awareness, researchers Justin Kruger and David Dunning of Cornell ran a series of studies to see if lack of ability is linked to low levels of self-awareness.

In their experiments, they had various participants perform various tasks and then estimate how well they did. The tasks included telling jokes, logical reasoning and grammar tests. Finally, they wanted to see what could be done to help someone more accurately assess their current ability levels. 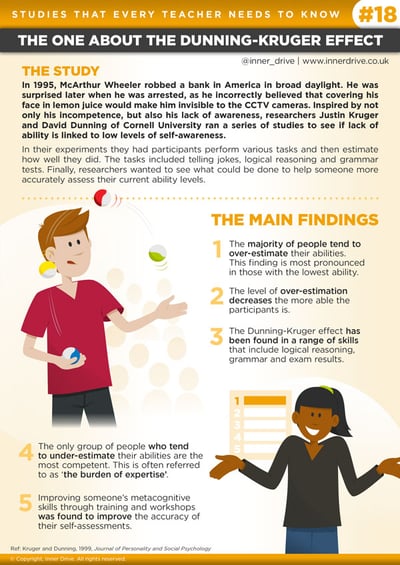 #1 The majority of people tend to over-estimate their abilities. This finding is most pronounced by those with the lowest ability.

#2 The level of over-estimation decreases the more able that participants are.

#3 This finding, known as the Dunning-Kruger effect, has been found in a range of skills that include logical reasoning, grammar and exam results.

#4 The only group of people who tend to under-estimate their abilities are the most competent. This is often referred to as ‘the burden of expertise’.

#5 Improving someone’s metacognitive skills through training and workshops was found to improve the accuracy of their self-assessments.

It appears that this research confirms what many notable figures from history have previously stated. Socrates proclaimed that “I know one thing: I know nothing”; Charles Darwin noted that “ignorance more frequently begets confidence than does knowledge”; William Shakespeare in As You Like It wrote “The fool doth think he is wise, but the wise man knows himself to be a fool”, and Thomas Jefferson once said “he who knows best knows how little he knows”. Indeed, Luke Skywalker says in Star Wars that overconfidence by the dark side led to the Death Star being blown up.

Why do people not get better at recognising their incompetence, especially if they experience many failures? Research suggests that people may attribute their failures to external factors, such as luck or circumstance, as a way of protecting their self-esteem. This is not a bad short-term strategy to protect confidence, but unfortunately is found to be a poor strategy for long term learning and development.

This study has three important implications. Firstly, it is important to be wary of anyone who claims anything with 100% confidence. This is often a sign of a lack of expertise, not of superior knowledge. Indeed, the authors of the study note that “the same incompetence that leads them to make wrong choices also deprives them of the savvy necessary to recognise incompetence, be it their own or anyone else’s”.

Thirdly and finally, we have to find a good balance in helping students understand their current level in a way that does not hinder their motivation. If they believe that their abilities are set and not going to change, then they are unlikely to put in additional work. Indeed, research suggest that students with this fixed mindset give up quicker, cope worse with transitions, have poorer coping skills and generally get lower grades.

How do we strike this balance of heightened self-awareness and motivation to get better? Teaching students metacognitive skills has been shown to help. These skills include better preparation before an event, self-monitoring and regulation during it, and calm rational analysis afterwards.

Reference: Kruger and Dunning, 1999, Journal of Personality and Social Psychology

#16 The One About Parental View on Failure END_OF_DOCUMENT_TOKEN_TO_BE_REPLACED