#16 The One About Parental View on Failure

#16 The One About Parental View on Failure

After experiencing a failure, students often look to their parents to see how they react. But what impact does parental view on failure have on their child’s mindset? Parents can view failure as either ‘enhancing’ or ‘debilitating’. An enhancing view of failure sees setbacks as a chance to learn and grow, whereas a debilitating view of failure sees setbacks as a source of shame and forms the basis of a negative judgement on someone’s ability.

Researchers from Stamford University ran a series of studies with over one hundred parent and children pairs to explore what impact either an enhancing or debilitating view of failure has on their children’s own mindset. Their results, recently published in the journal Psychological Science, offer guidance of how young students can develop a growth mindset. 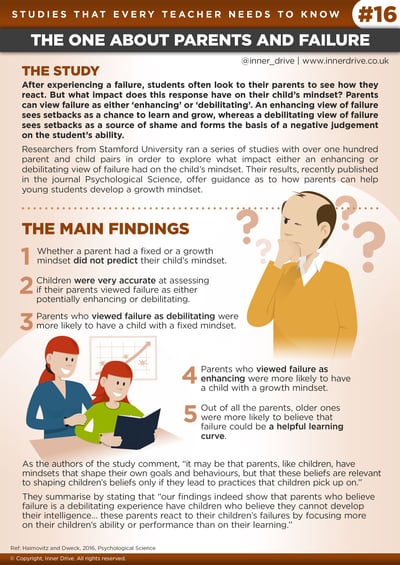 #1 Whether a parent had a fixed or growth mindset did not predict their child’s mindset.

#2 Children were very accurate at assessing if their parents viewed failure as either potentially enhancing or debilitating.

#3 Parents who viewed failure as debilitating were more likely to have a child with a fixed mindset.

#4 Parents who viewed failure as enhancing were more likely to have a child with a growth mindset.

#5 Out of all the parents, it was the ones who were the oldest who were more likely to believe that failure could be a helpful learning curve.

As the authors of the study comment, “it may be that parents, like children, have mindsets that shape their own goals and behaviours, but that these beliefs are relevant to shaping children’s beliefs only if they lead to practices that children pick up on”. They summarise by stating that “our findings indeed show that parents who believe failure is a debilitating experience have children who believe they cannot develop their intelligence… these parents react to their children’s failures by focusing more on their children’s ability or performance than on their learning”.

This study is one of the few that directly looks at how parental beliefs impact and influence their children’s mindset. Most of the research to date has looked at how their attitudes impact on student performance, with valuing education and having high but realistic expectations resulting in higher grades. Other areas to have found similar results including attitude towards homework and positive reading habits.

In terms of developing a growth mindset, other research has focused on parental behaviours instead of attitudes. For example, evidence suggests that the type of praise parents use when children are very young (aged 1-3 years old) is a significant predictor of their child’s mindset up to five years later. Other strategies to help develop a growth mindset include encouraging students to choose challenging tasks, encouraging helpful self-talk and focusing on developing skills instead of comparing yourself to others.

The results from this study highlight how someone’s mindset may not always be visible to others. It is internal and it is hard to accurately guess someone’s beliefs. What is easier to see is their behaviour. This suggests that it is not what parents think, but what they do that matters. It is not their intentions, but their actions that matter. It is totally plausible to assume the same may be true for teachers in the classroom.

Any parents evening or workshop aimed at helping their child develop a growth mindset should include the importance of visibly dealing with setbacks, disappointments and mistakes in a positive way. The researchers conclude by saying that “it may not be sufficient to teach parents a growth mindset and expect that they will naturally transmit it to their children. Instead, an intervention targeting parents’ failure mindset could teach parents how failure can be beneficial, and how to react to their children’s setbacks so as to maintain their children’s motivation and learning”. This type of intervention not only could lead children to adopt a growth mindset, but could also directly help them improve their persistence and resilience by reframing their opinions on failure.

Re: Haimovitz and Dweck, 2016, Psychological Science

#21 The One About... Teacher Rating and Learning END_OF_DOCUMENT_TOKEN_TO_BE_REPLACED