#13 The One About ... Marshmallows and Self Control

#13 The One About ... Marshmallows and Self Control

If I offered you a marshmallow and told you that if you refrained from eating it for 15 minutes, I would give you two instead, would you be able to do it?

In the early 1970s, Stanford researcher Walter Mischel and colleagues asked ninety-two 3-5 year-olds this question, and the follow up studies and results twenty years later changed how we viewed self-control forever.

This study is important for teachers to know for several reasons. Firstly, it is so simple that you could easily replicate it yourself (and many have). Secondly, it is a longitudinal study, which means we get to track the path of the students in the study over many years. Thirdly and finally, it is one of the most famous studies ever in psychology and is a staple in most psychology and education handbooks. 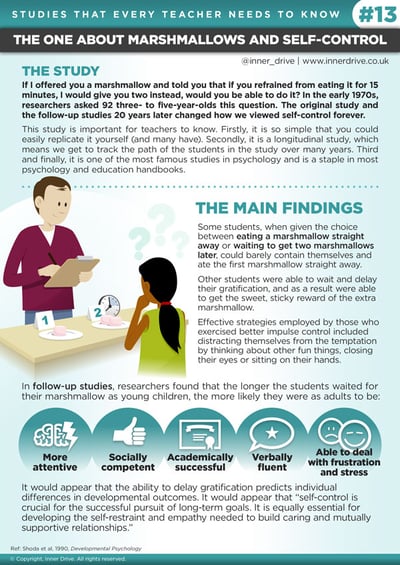 Some students, when given the choice between eating a marshmallow or waiting to get two marshmallows later, could barely contain themselves and ate the first marshmallow straight away.

Other students were able to wait and delay their gratification, and as a result were able to get the sweet, sticky reward of the extra marshmallow. Effective strategies employed by those who exercised better impulse-control included distracting themselves from the temptation by thinking about other fun things, closing their eyes, or sitting on their hands.

In follow up studies, Walter Mischel found that the longer the students waited for their marshmallow as young children, as adults they were more likely to be:

It would appear that the ability to delay gratification predicts individual differences in developmental outcomes. Indeed, in his book, Walter notes that “self-control is crucial for the successful pursuit of long-term goals. It is equally essential for developing the self-restraint and empathy needed to build caring and mutually supportive relationships”.

Subsequent research has focused on what causes some children to seek instant gratification, where others are more able to wait. Some researchers believe it is down to differences in the brain, with those who give in to temptation having less activity in their pre-frontal lobes (associated with conscious decision making and impulse control) and more in the ventral striatum (associated with addictive behaviours).

Other people think it may be associated with trust, with a different study finding that if the young children don’t believe they are going to get a second marshmallow if they wait, they are more likely to eat the first one. This has some interesting implications for students who perceive school, teachers or parents as not being trustworthy.

Finally, others have suggested that students who ‘fail’ the marshmallow test may not do so because of limited self-control, but because they are acting very logically. If you grow up with very limited resources around you, it may make sense to take the immediate rewards as opportunities to do so again in the future may be scarce.

Is school one big marshmallow test? With an ever increasing amount of distractions (including, but not limited to, mobile phones), then the ability to improve self-control and delayed gratification has become a premium skill. Perhaps it is not surprising that recent research by the London School of Economics found that schools that have banned mobile phones get an increase in GCSE results.

Maturity has been described as the increasing gap between thinking something and deciding to act on it. The way our brain develops during the teenage years means that there are significant improvements that reduce sensation seeking whilst improving impulse control. As well as removing temptations, having discussions about how to improve self-regulation and delayed gratification, and why students should want to, is a good starting point.

Is more delayed gratification always better? This interesting article, written by a Yale university student, suggests maybe not. Essentially, once in a while, it may actually be good to eat the marshmallow. It is important to work hard, but having fun and enjoying the process along the way is also important. The answer? It may be about finding a good balance between starving yourself and gorging on every marshmallow in sight.

#12 The One About ... Student Resilience END_OF_DOCUMENT_TOKEN_TO_BE_REPLACED