How much of a child’s success is down to their IQ? Do genes dictate success? And can you accurately predict which of your students will go on to be successful? To answer these questions, we can look at one of the most famous and fascinating studies in psychology.

Dr. Lewis Terman was responsible for one of the largest ongoing longitudinal studies on gifted and talented students. Based at Stanford University in the 1920s, he initially believed that a person’s IQ would determine their success. Dr Terman recruited 1,528 children who scored over 135 on their IQ test and monitored their success both in school and subsequently in adult life (and indeed still continues today).

The children in his study often affectionately referred to themselves as the “Termites”. Dr. Terman believed that his ‘termites’ would go on to be the leaders of their generation due to their genius IQ scores. The data is updated roughly every five years. As a result, we now know more than ever about how important IQ is and what other factors determine success in both school and in life. 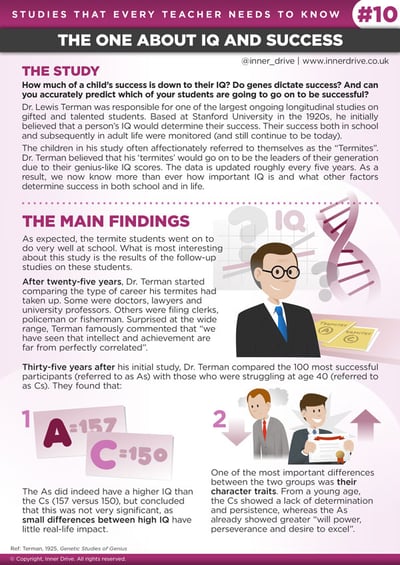 As expected, the termite students went on to do very well at school. What is most interesting about this study is the results of the follow-up studies on these students. After twenty five years, Dr. Terman started comparing the type of career his termites had taken up. Some were doctors, lawyers and university professors. Others were filing clerks, policemen or fishermen. Surprised at the large range, Terman famously commented that “we have seen that intellect and achievement are far from perfectly correlated”.

Thirty five years after his initial study, Dr Terman compared the 100 most successful participants (referred to as A’s) with those who were struggling at age 40 (referred to as C’s). They found that the A’s did indeed have a higher IQ than the C’s (157 versus 150), but concluded that this was not very significant, as small differences between high IQ have little real-life impact. One of the most important differences between the two groups was their character traits. From a young age, the C’s showed a lack of determination and persistence, whereas the A’s  already showed greater “will power, perseverance, and desire to excel”.

Dr Terman died still believing that IQ was largely heritable and an important predictor of life success. However, data from his research helped him (and hopefully us) see a more nuanced picture. If your I.Q. is the starting point, your environment and traits such as effort, persistence and resilience help determine how far it will take you.

The Termite study offers a fascinating insight into the predictive power of IQ. Other research has confirmed that a person’s IQ has a large genetic component and is highly correlated with their academic performance, creativity, art, happiness, future earnings, and even life expectancy.

Likewise, other research has highlighted the importance of mindset, resilience, emotional intelligence and grit towards success. Research has found that it is clearly not a case of nature vs. nurture, but a combination of both. The main question clearly isn’t which has most impact, but which areas can we help improve, and how do we best do so. Research on this is ongoing, and is probably unlikely to reach a definitive answer.

This study raises some interesting questions, namely: how good are we at predicting who is going to be successful? And how do we best nurture the skills that will help them to do well? Evidence from the Education Datalab suggests that in primary schools, high achievement is often due to date of birth (with students born in the start of the academic year having a massive advantage over their younger peers, though this effect gets smaller as students progress through the school system).

Likewise, what do titles such as ‘gifted and talented’ do to students? Does it imply to students that it is their gifts and talents that will make them successful and not what they do with them?

#8 The One About ... Teenagers and Social Rejection END_OF_DOCUMENT_TOKEN_TO_BE_REPLACED