Author Ken Blanchard once said that “feedback is the breakfast of champions”.

However, this is only true when feedback is done right. Research suggests that 38% of feedback interventions can actually do more harm than good to students. Therefore, it is essential that educators are planning their feedback effectively, so students get the most from it. But what is the right type of feedback?

Although the what and how of giving your students feedback is important, when you give feedback is just as crucial. There’s been a lot of confusion amongst educators about when they should give feedback, as research into this area is contradictory.

For many years, immediate feedback was considered the most beneficial for student learning. Yet more recent research argues the opposite -  that delayed feedback is better. So which one is it?

What is Immediate and Delayed feedback?

How research defines immediate feedback has ranged anywhere from feedback delivered less than a second after a task to simply the same day. Alternatively, delayed feedback is defined as anywhere between 10 seconds after task completion, 24 hours or even a whole week later. With the lack of a definitive timescale for each type of feedback, it’s no wonder that researchers can’t agree on which is better.

Research suggests that this inconsistency depends on the type of feedback being given and in what context it is being given. This is because immediate and delayed feedback can serve different purposes in the classroom. So, how do they differ? And when should each of them be used?

For the purpose of this blog and its implications in the classroom, we define ‘immediate’ feedback as an umbrella term, including any feedback provided on the day of the task. This can be seconds after task completion or a few hours later. We, therefore, refer to delayed feedback as feedback that is given the next day or over the following week.

How Does The Brain Respond to Feedback?

Research shows that immediate and delayed feedback activate different parts of the brain.

Immediate feedback activates something called the Basal Ganglia which is typically associated with reward-based learning strategies. This finding supports other research which argues that immediate feedback could be used as a motivational tool by:

For example, when practising reading comprehension, your students may correctly pronounce a complex word that they haven’t seen before. Therefore, you reward them by either saying “well done” or nodding your head, which will boost your student’s motivation to continue reading.

On the other hand, delayed feedback activates the hippocampus, which is uniquely involved with memory coding and working memory. Research shows that this supports better memory retention of feedback as it:

It’s important to note that this activation of the hippocampus wasn’t present when people were given immediate feedback. But these findings should be taken with a pinch of salt, as the researchers defined delayed feedback as six seconds in this instance. In most classrooms, this would not be the case.

The type of feedback you’re wanting to give your students will influence the timeframe in which you should give it. We can broadly classify feedback into two types:

When we consider this distinction, we can see where the different definitions of what counts as immediate and delayed feedback have come from. So, when should teachers provide corrective feedback in the classroom? While teachers should avoid interrupting their students, it is better to give a correction as soon as possible, up to 10 seconds later.

On the other hand, when providing evaluations, the best way to ensure that students take this feedback on board is to provide it after some delay, the next day for example. This provides students with the opportunity to reflect on their performance.

The Type of Task Matters

One other factor to consider is the length of the task a student is being given feedback on. Essentially, the longer the task, the more beneficial it is to delay feedback. But why is this the case?

Shorter tasks are likely to evoke feedback that is easy to process automatically, while longer tasks are likely to evoke more detailed feedback which requires effortful processing. Research suggests that when students can process feedback automatically, the sooner the feedback is given, the more effective it is in getting students to learn and change from it. Whereas when feedback requires deliberate and effortful processing, delaying feedback is more effective as it gives students the time and space they need. Delaying feedback can, in a way, be seen as allowing students to space their learning.

It’s worth noting that shorter tasks don’t necessarily mean short, simple feedback, and longer tasks don’t always mean long, complex feedback. So, while the length of task can act as a guide to when you should give feedback, the key thing to think about is how easy it will be for students to process the feedback.

What About Student Personality?

One final thing to consider is that their personality will affect how well students receive feedback at different times. For students who are confident in their abilities and can take feedback on-board well, immediate feedback can still be beneficial.

However, some students may react negatively to immediate feedback - they can get frustrated, upset or defensive when corrected for an incorrect answer. In these cases, it may be better to approach these students after a small delay, so that they can reflect upon and process this feedback in a calmer state.

This caveat applies less so to evaluative feedback, where we believe that delayed feedback is most effective for all students, allowing them to deeply process and remember the feedback. 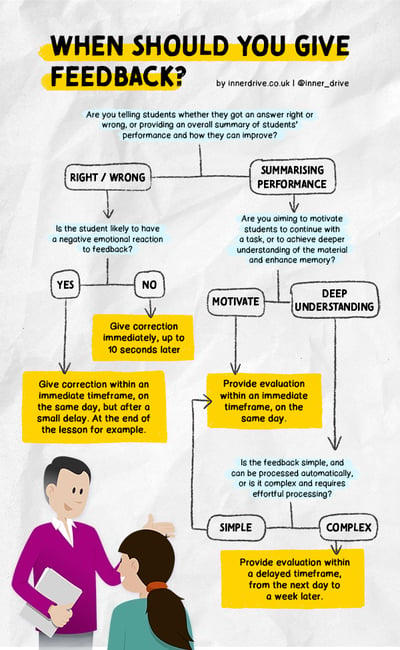 So, we can see that immediate and delayed feedback serve different purposes and should be used in different circumstances. Delayed feedback is preferable if you really want students to engage with and learn deeply from it, particularly if the feedback is evaluative.

As a rough guide, feedback should be given when there is plenty of time for the student to concentrate, and relatively soon after the task (so they still remember the work they did), but with sufficient time for reflection and processing of the feedback.

We’ve tried to narrow down and simplify for you the various interpretations of immediate and delayed feedback, and when they should be used. But, if you’re still left feeling a bit clueless, our simple step by step flowchart can help you decide exactly when you should provide a certain piece of feedback.

For more tips on how to give effective feedback, here are some useful resources:

How to use group work effectively END_OF_DOCUMENT_TOKEN_TO_BE_REPLACED