Should children specialise in one sport early?

Should children specialise in one sport early?

Many parents want their child to be the next sporting superstar. This has partly led to children playing competitive sport earlier and earlier. However, recent research has shown not only that sporting success is not linked to specialising in one sport early, but also that the opposite is true - high levels of performance are more likely to be achieved when a child doesn’t specialise until their teenage years. So, why is specialisation at a young age counterproductive? 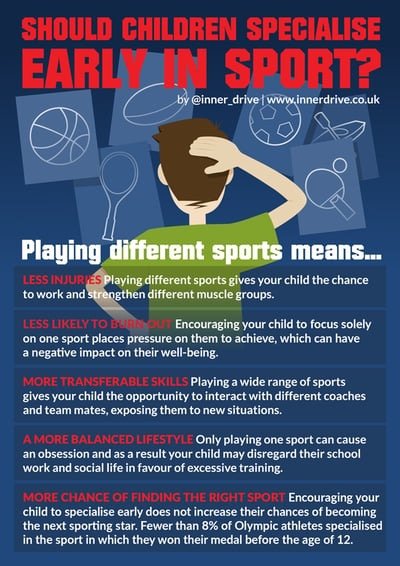 Specialising in one sport early can increase the chances that a child will suffer from injury, as different types of sports work and strengthen different muscle groups. Recent research has demonstrated this, such that boys aged 10-12 who practiced a wide range of sports had more muscle strength and better gross motor coordination skills and were less likely to suffer from injury in comparison to those boys who specialised in one sport from a young age.

Burnout can be defined as extreme physical or emotional exhaustion, due to excessive long-term stress. This is often caused by excessively high expectations being placed on someone. Recent research has shown that burnout is more likely to occur if a child specialises in one sport early: amongst a group of 74 young athletes classified as either specialisers (those who trained in one sport only) or samplers (those who played multiple sports), it was those who were classified as specialisers that were more likely to suffer from emotional exhaustion.

Similarly, the WTA have recognised the dangers of early sport specialisation and extensive training and have put in place stipulations to protect the psychological health of tennis players, which has subsequently led to a 43% increase in career lengths, as well as reducing the number of players leaving the tour from 7% to less than 1%.

Research has shown that giving children the opportunity to participate in a range of sports encourages the development of transferable skills, which not only allows for further progression in sport but also assists in everyday life off the playing field.

For example, children who play a range of sports are given opportunities to interact with a variety of individuals, including different coaches and team mates. All of this helps them develop their ability to adapt to new social situations and work effectively within a team.

Specialisation in one sport from a young age can cause an obsession and disregard for all other aspects of life. A child may come to devote all of their free time training, meaning they never spend time relaxing or socialising.

Similarly, it is important that a child does not become so involved in sport that they focus all their efforts on training and ignore their school work; they shouldn’t end up believing that their academic success is irrelevant as their career will be in sport. However, only a very small percentage of athletes make it to the top (way less than 1%) and there is always the possibility of a serious injury, so it is paramount that all athletes have an education to fall back on.

Many parents believe that the most successful athletes start elite training in their discipline at a very young age and hence if they can encourage their child to specialise early on, they too can become the next sporting star. However, research has found there to be no association between the age at which a child starts systematic training and their future athletic success, with some research going as far as to suggest that fewer than 8% of successful Olympic athletes specialised in the sport in which they won their medal before the age of 12.

Parents need to bear this in mind and guarantee that any decisions they make regarding sport ensure their child’s best interests. They themselves should not be setting unrealistic goals for their child and forcing them to disregard other sports in favour of specialisation. Instead, sport for young children should be seen as an opportunity for socialising and having fun with friends.

Parents often buy into the myths surrounding development in sport, believing that early specialisation will give their child a head start and increase the likelihood they will achieve. However, this can actually be counterproductive and have negative effects on a child’s physical and psychological development. Parents instead should be looking to give their child the freedom to explore and decide for themselves which sports (if any) they want to be involved in and eventually specialise in. 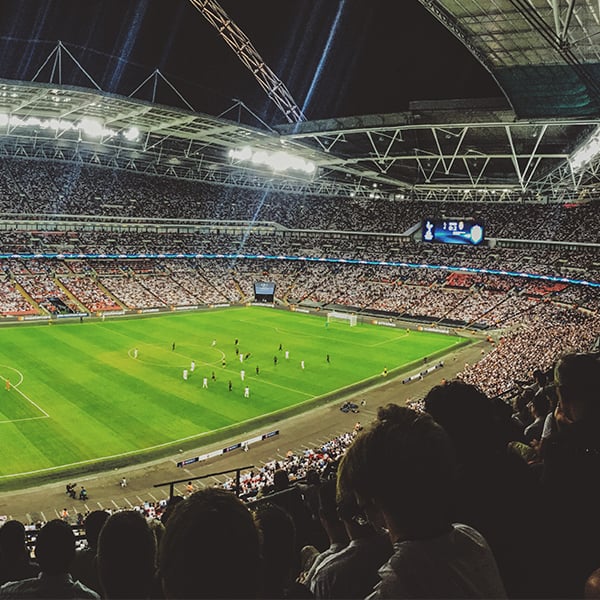 Why do athletes choke? A Sport Psychologist's explanation END_OF_DOCUMENT_TOKEN_TO_BE_REPLACED