Over 40 years ago, at Euro 1976, we saw the first major international tournament decided by penalties. Czechoslovakia beat Germany 5-3 with one of the most famous penalties ever seen: "the Panenka" chip down the middle. Before then, drawn matches were often decided by coin tosses or the drawing of straws. Given this curious origin, it is no wonder that penalty shoot outs have intrigued football fans.

Many theories exist as to what does and doesn’t work. Should you trust left footers to take a penalty?  Do experienced players perform better than young ones? Does a goalkeepers antics affect their opponent? This blog looks at 10 penalty taking beliefs and distinguishes between myth and fact. 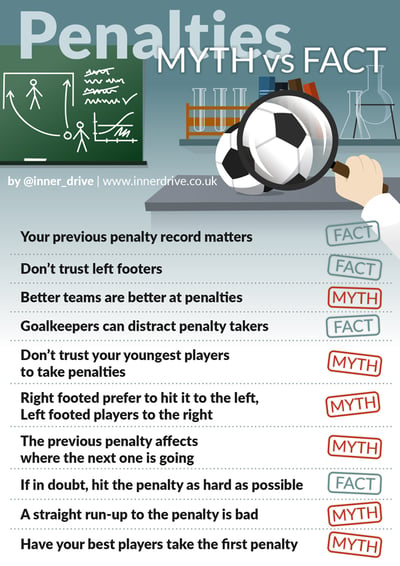 1. Some Countries Are Better Than Others

A quick look at the success-rates of the major nations at Euro 2016 suggests that some teams are much better at penalties than others.  Belgium have the best record (winning 100% of penalty shoot-outs), followed by Germany (71%), France (50%) Italy and Spain (both 33%) and finally England (17%).

This is good news for Germany and Spain (who have won their last 2 and 3 penalty shoot-outs respectively) and bad news for England who have lost their last three (Euro ‘96, World Cup ’98 and World Cup ’06).

It is hard to say exactly why this may be the case (it could be down to better scouting or because goalkeepers are getting better at reading left footed players). Either way, the message is clear; don’t trust left-footers to take your penalties.

Verdict: Was a Myth, is Now a Fact

3. If in Doubt, Hit The Penalty as Hard as Possible

In an investigation on power v placement, researchers analysed 129 penalties that were taken during World Cup Finals and in the finals of the UEFA Champions League. They found the following data for how hard you hit your penalty:

The most successful type of penalty was one that was hit at 75% of maximum power. It suggests that a combination of power and placement is best. However, what to do if in doubt? If you hit it softly, it increases the chance of hitting the target, but also dramatically increases the likelihood of the goalkeeper saving it (resulting in scoring 47% of the time).

If you hit it with 100% power, you are more likely to miss the target, but the chance of the goalkeeper saving it if it is on target is very small (resulting in scoring 63% of the time). So if in doubt, hit the penalty with maximum power.

Do the antics of the goalkeeper before a penalty shoot-out affect how likely it is that the opposition player will score? When Dutch goalkeeper Tim Krul successfully came off the bench one minute before a penalty shoot-out in the World Cup Quarter Final against Costa Rica in 2014, he was very confident that he could out psych his opponents. He said: “I tried to get in the minds… I told the players I knew where they were going to shoot to make them a bit nervous”.

Research suggests that goalkeepers can in fact out psych their opponents, by doing one of two things. The first thing is to spread out and make themselves look as big as possible before the penalty is taken. This makes the opponent falsely believe that the goalkeeper is bigger than he actually is, and that the goal is smaller. This strategy, utilises the Muller-Lyer illusion, which alters peoples ability to accurately judge the width of an object (as seen in the graphic below)

The bottom line looks longer than the higher one, despite them being the same length. Goalkeepers can perform a similar illusion by making themselves look taller and wider by adopting an extended H or X shape by spreading their arms above their head.

The second thing to do is to stand 6-10 cm off centre of the goal (i.e. marginally to the left or the right). This makes one side of the goal 2.9% wider than the other. This tiny difference results in the penalty taker aiming for the slightly larger side almost 60% of the time. Knowing which direction your opponent is more likely to shoot can be used as a key advantage for goalkeepers.

5. Better Teams Are Better at Penalties

How does an underdog that scrapes a draw and gets to a penalty shoot-out with a team who is ranked much higher than them fare? Very well, it turns out. Teams such as Czech Republic and Denmark have a great overall success rate for penalties (Czech Republic players have scored 20 out of 20 penalties, with Danish players scoring 9 out of their 10 penalties in major tournaments). These stats are far better than players from France, Italy, Spain and England.

Psychologists say that one possible explanation for this is that players from the major nations have a higher status in the game (as measured in Champions League appearances and individual honours). Therefore the pressure on them to succeed causes an "ego-threat", which is where they realise that they have more to lose if they miss. This seems to be confirmed by players from these teams rushing their penalties (English and Spanish players are the most guilty of this) 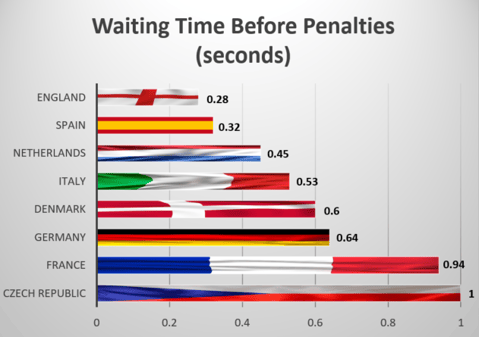 If you had to choose one player to take a penalty for you, would you choose your current star or your young prodigious player? Most managers, fans and pundits would go for the current star. Eager to find out if this was the correct strategy, researchers divided players into two categories: current stars and future stars.

Current stars were those who had already won World/UEFA/South American Player of The Year or Top Goal-scorers in their leagues or at major tournaments. ‘Future Stars’ were defined as players who would go on to win these awards later in their careers.

They found that “current stars” scored on average, 65% of the time from the penalty spot. “Future stars” scored 89% of the time. This difference was explained in a similar way to why underdog teams outperform better teams; the better the player, the more they worried about what failing would mean to their status, whereas younger players see the penalties as a stage for which they can make a name for themselves, and subsequently perform better.

7. Right Footers Prefer to Hit It To The Left, Left Footed Players to the Right

Do players have a natural side to aim their penalty kick at? It seems so. For right-footed players, it would be more natural to aim for the left corner (from the kicker’s perspective). The reverse is true for left-footed players. In a study of almost 1,000 penalties from the Bundesliga over 12 years, players chose to hit the penalty to their natural side 44% of the time, in the centre 15% and to their non-natural side 41% of the time. 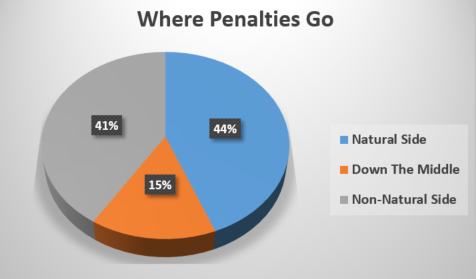 Verdict: Mainly Myth with a Slither of Fact

8. The Previous Penalty Affects Where The Next One Is Going

You are a goalkeeper in a penalty shoot-out. The last three penalties have been scored in the bottom left hand corner. The next player is about to take their penalty – where do you dive? If you decided to dive to the right, thinking that after three penalties in a row to the left this next one will surely go to the right, you are in good company: 70% of goalkeepers at World Cups and Euro Championships do the same. However, you would all be wrong.

This decision making is known as "the Gambler's Fallacy". This is where you think previous events must even out at the next one. It is like thinking that after three reds at the roulette table, the next spin must be black. The truth is, each spin is independent. This is relatively true for penalties too. The author of this research states that "complete randomness is generally the best strategy in competitive games" as this removes the Gambler's fallacy.

9. A Straight Run-Up to a Penalty Is Bad

Is it better to have a straight run-up like Thomas Muller or come in at an angle like Eden Hazard?

The answer is that it doesn’t make much of a difference. The wider the angle of the run up allow greater pelvic rotation. This increase of motion, in theory, allows players to make better contact with the ball. However, attempts to alter the angle of the run-up to players who typically have a straight run up does not help them improve the power or accuracy of their shots.

This is probably because it feels forced and un-natural. When it comes to penalties (and indeed any skill under pressure), it is best to stick to what you know and what you feel comfortable with.

10. Have Your Best Players Take The First Penalty

In 2006, England lost in the quarter finals of the World Cup to Portugal on penalties. Cristiano Ronaldo confidently stepped up and scored Portugal’s 5th penalty. Unfortunately, it was a different story for him in the Euro 2012 semi-finals, when Spain eliminated Portugal. Ronaldo was again due to take the fifth penalty but didn’t get the chance as Portugal lost before his turn. So when is the best time for your best player to take a penalty?

Evidence suggest that you should put your best penalty taker in fourth or fifth position and the second best penalty taker either third or fourth. This is because these are the penalties that will have to be scored in order to win or avoid losing the match. We think the risk of the match being over before they get a chance to take it is significant, so fourth is probably better than fifth. What about your weakest of your five penalty takers? It would make sense for him to go first or second, as this is the time in the contest where there is the least pressure.

So hopefully that has helped sort the myths from the facts. You shouldn't trust left footers. Experienced stars do worse than their young rivals. Goalkeepers can put-off their opponents. See more of this on our YouTube channel. 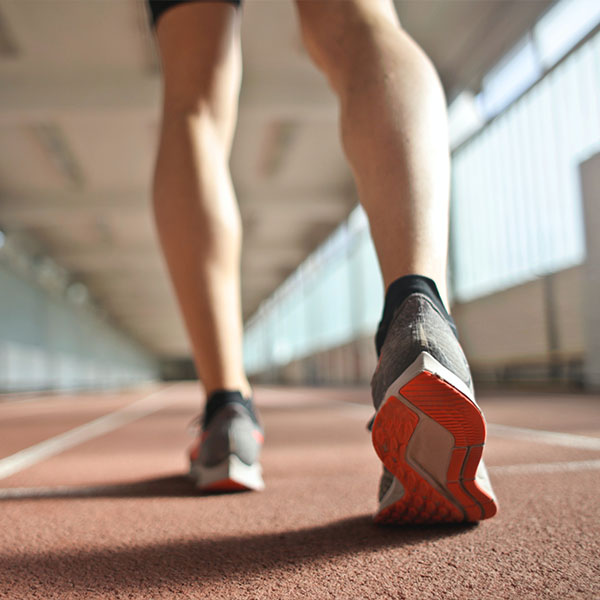