Why are New Zealand so good at rugby? A team culture analysis

Why are New Zealand so good at rugby? A team culture analysis

In 2011, New Zealand ended a long wait to win the Rugby World Cup then went on the win again in 2015. Prior to this, the All Blacks team were often favourites to win each world cup but failed to do so. Now that the 2019 Rugby World Cup has started (and for most of us the season too), we look at what it takes to have a winning culture within a sports team – and how the ground works for this culture were laid back in 2011 for New Zealand. 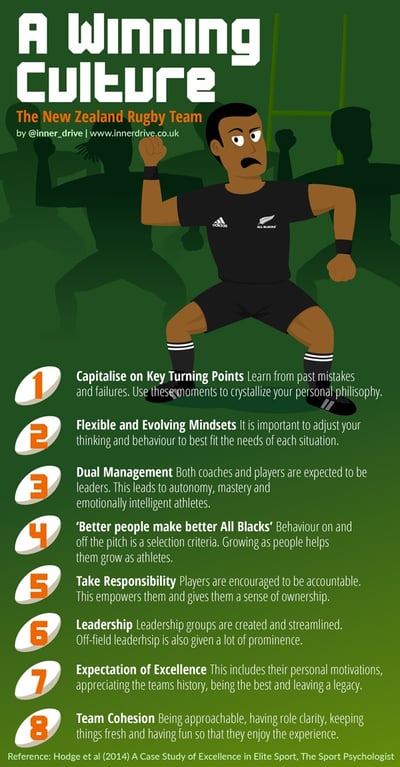 Graham Henry, their coach at the time, spoke about the importance of learning from past mistakes and failure (growth mindset, anyone?). These moments provide opportunities to crystallise your personal and team philosophies. An easy way to learn from past mistakes as a team is to ask two key questions:

The answers to these questions will provide clear strategies and goals for any team.

Henry stressed how important it is to be flexible, so that your approach best fits the needs of the situation. He says: "I’ve been coaching for 37 years … [When I started] I was very directive as a coach … pretty authoritarian. But now it’s … a group of people trying to do something together, rather than a group of coaches and a group of players ... I think that’s evolved naturally … If you didn’t change [as a coach], you were history."

There is evidently a thin line between having a clear vision and sticking stubbornly to an idea that isn't working. Having a clear vision is about working as a group, while being flexible and receptive with each other’s ideas to create a shared team vision. Knowing the difference was key to the New Zealand win at the 2011 Rugby World Cup, no doubt.

In a team like the All Blacks, both coaches and players are expected to be leaders. Henry stated that “It was the philosophy to give the players ownership … and to dual-manage the All Blacks with a group of players, and a group of oldies (coaches)."

The thinking was that this dual management will lead to autonomy, mastery and emotionally intelligent athletes. It might be interesting for you and your team to consider what shared roles you can promote within the team, or what roles might be important as a group of coaches and players to fulfil. Having this structure clearly in place is of major importance in any sports team. To find out more, check out our blog The Importance of Knowing your Role in Sports.

Behaviour on and off the pitch is a selection criterion for the New Zealand team. The management team firmly believed that helping their athletes grow as people helps them to develop as players. This was one of the most important aspects of creating a tournament winning team, and one that all teams should try to implement.

In a world that is so driven on just results and performance, it is always refreshing to hear of the desire to develop each athlete as an individual. Key to this is appropriate support. It is not enough for coaches to ask players to display certain skills; appropriate time and attention must be spent teaching them how to develop the right behaviours and attitudes.

One great way to help promote this is to ask the team to create a list of values, replying to questions such as “What does it mean to be an All Black?”. Then, ask them to match behaviours with these values. This way, the whole team will become accountable for each other – which is our next point.

Players within the New Zealand team are encouraged to be accountable. This links closely with the 'dual management' and 'better people make better All Blacks' themes that we described above. This sense of responsibility empowers players and gives them a sense of ownership.

There are two simple ways to start taking responsibility:

Taking responsibility isn’t about working on your own – you can often use others to help with this process.

Leadership groups are created and streamlined within the New Zealand rugby team (to avoid too many meetings or too many cooks spoiling the broth). Off-field leadership is also given a lot of prominence within the squad.

Leadership within a sports team can take many shapes: on field leaders come in different styles, even in the same team. Some are loud and motivating, whereas others quietly drive physical standards on the pitch – and of course, some do both.

Two simple ways to become a better leader include:

Check out another one of our blogs for tips and strategies to become a better leader.

During previous World Cups, the All Blacks welcomed their favourite-to-win tag. This was embraced by athletes telling each other their personal motivation, as well as appreciating the team history, being the best and the importance of leaving a lasting legacy.

In Psychology, there is something cool that coaches and teams can definitely harness that’s called the Pygmalion Effect. This is the phenomenon where having high expectations for someone (or a whole team of players) brings about higher achievement.

Clearly, the All Blacks come to this year’s World Cup with high expectations as they did during the previous ones. If we trust the Pygmalion Effect, then players’ motivation, effort and resilience will be increased. Check out this blog to find out more about the power of high expectations. We also wrote a great guide for parents of young athletes here.

Team cohesion was increased through strategies such as the importance of being approachable, having role clarity and keeping things fresh. Most importantly, it was also emphasised to the New Zealand rubgymen by coaches that having fun and enjoying the experience was key even when under so much pressure, as an athlete's career goes so quickly.

An easy strategy that we use to encourage team cohesion is to create shared team processes. Before matches, we often ask our players for three things that they want to focus on for the match. This allows their attention to be directed towards what it will take them to play well. These can be general focuses (i.e. quick to the breakdown) or specific focuses (i.e. run hard dummy lines). As a team, athletes can develop general processes to work on. This makes sure that the team is pulling in the same direction.

The impressive winning culture of the New Zealand rugby team is clearly defined, and that is one of the most important parameters that allowed them to win the past two rugby World Cups. Even more importantly, this culture was actually actioned.

Obviously, not all of the above tips can be applied in your team. However, it is interesting to consider whether some of these practices can be applied to your team, what would it look like and how would it work.

This blog was based on research published in The Sports Psychologist. You can read it in its full glory here.

The impact of the crowd's noise on referee decisions END_OF_DOCUMENT_TOKEN_TO_BE_REPLACED