Eric Cantona once said that “preparation is everything”.

It’s not just the will to win, but the will to prepare to win that really separates the best from the rest. After all, if you prepare properly, you have more to give on match day. But what does good preparation for a big match or competition actually look like?

Sleep Your Way to Success

The way in which an athlete prepares for a game is extremely important; and this starts the night before with a good night’s sleep. Research has shown that when athletes got sufficient sleep, their speed increased by 5% and their shooting accuracy increased by 9%. These are large margins in sports where small differences can make a big impact.

It’s a State of Mind

Athletes should also prepare for a match by using positive self-talk. Self-talk involves use of statements such as “I played really well in my last match”, which replaces negative emotions with happy ones. Listening to music is another way in which athletes can get in the right head-space before they compete. Listening to upbeat or inspirational music can block out distracting thoughts, boost motivation, and allow athletes to visualise positive outcomes that they want to achieve during the match. 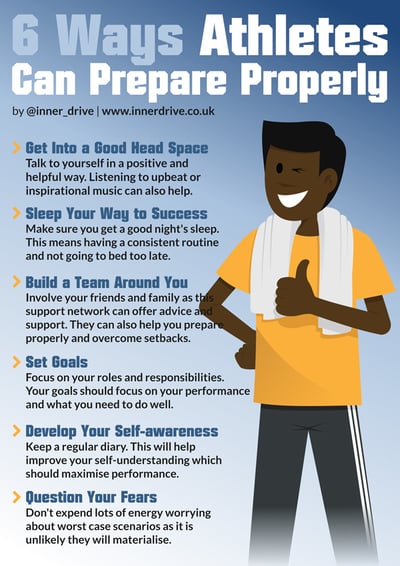 Recent research has shown that the type of goals athletes set themselves can have an impact on the emotions surrounding their performance. Athletes should look to set themselves performance goals rather than just outcome goals, as this deters them from focusing on things that they only have partial control of. As a consequence, athletes are less likely to see a decline in motivation or experience feelings of anxiety.

Our fears are often irrational. Mark Twain once said “I’ve had a lot of worries in my life, most of which never happened”. This quote perfectly captures how many athletes spend time and energy worrying about the worst case scenario which is unlikely to happen. For more information about questioning your fears, check out our blog ‘How to Manage Self-Doubt’.

Build a Team Around You

Having a support network can help athletes deal with the stresses and strains of sport. This group of people can be key as they can offer advice and support. They can also help athletes to re-build their confidence in the face of setbacks, an idea supported by research that demonstrates that how a parent communicates and reacts to their child’s setbacks can be a significant predictor of the type of mindset the child adopts.

Athletes often underperform when they let their emotions get the better of them. However, development of self-awareness can somewhat eradicate this. Self-awareness can be achieved through athletes keeping a diary. This allows athletes to identify emotions that either enhance or hinder their performance. Through this advanced understanding, they are better placed to ignore negative emotions and place their focus on positive ones.

There are a number of strategies that athletes can employ to perform well under pressure and to ensure that they are not someone who only shows promise at training but fails to achieve in competition. If athletes prepare well, focus their effort on processes within their control and do not see use of their support system as a sign of weakness, they will have the best chance of performing when it really matters.