Cognitive Load Theory is a psychological theory that every coach needs to know about. If you are not already familiar with this theory, here is a quick rundown of what it is and how to apply some of the key principles to your coaching…

Cognitive Load Theory highlights how working memory has a limited capacity. Working memory is where we hold and process new information — for learning to take place, this information has to be transferred to long-term memory.

That sounds simple enough; however, there is a bottleneck between the two, meaning that information that doesn’t get transferred across is ultimately lost and forgotten. Cognitive Load Theory is all about acknowledging this bottleneck and presenting information to athletes in a way that aids and accelerates that transfer to long-term memory. 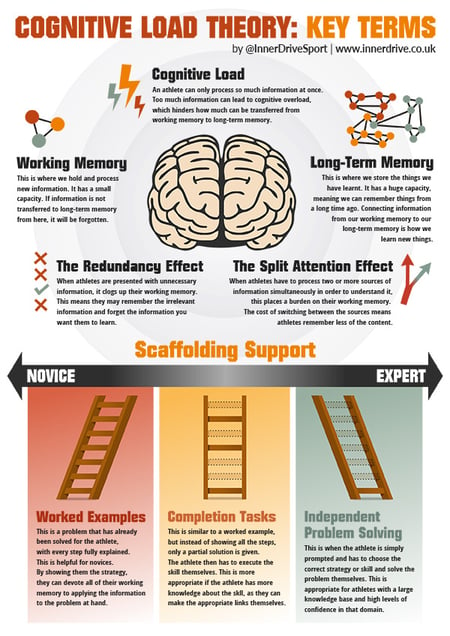 How can Cognitive Load Theory be incorporated into your coaching?

Different concepts and ideas have been developed in relation to Cognitive Load Theory to help improve learning and reduce the chances of overload happening. These are important for you to know as a coach to help you improve your coaching methods and boost learning in your athletes. Let’s take a look at a few of them…

When an athlete’s working memory becomes clogged up with unnecessary information, the brain suffers from what is known as cognitive overload. In this bottleneck, the athlete may only transfer the irrelevant or redundant information, not the key learning points.

The Redundancy Effect often hinders learning due to this inefficient use of working memory resources. For coaches, this means that you should:

The Split Attention Effect occurs when people have to refer to two different sources of information simultaneously when learning something. This creates an extra load on their brain, as switching between tasks takes time, effort and energy.

It is best thought of as an act of juggling, where each item of information represents one ball. Ask a novice juggler to use too many balls and inevitably some will get dropped. So, what can you do to limit this from happening?

Scaffolding is a method whereby you gradually remove support as the learner begins to progress. It helps to guide athletes to learn independently and manage their load. This is important when it comes to different levels of learners: some are just starting out, and some are experts. You can use this to offer different levels of support.

This method of coaching is beneficial because it provides athletes with enough structure so as not to not overwhelm them at their current level, but still stretches them enough to expand their knowledge.

There is also an added factor of feeling stress and pressure when competing in sport. This stress can overload the brain and lead to a decline in all cognitive functions.

Research shows that experiencing an interference or overload on cognition is strongly associated with poor performance relating to memory and processing.

If athletes are dealing with a high cognitive load then it can be mentally exhausting and bring about poor performance. This can lead to an athlete experiencing negative emotions, which in turn can affect their confidence and motivation. Because of this, cognitive load has been described as closely related to the emotional state of the athlete.

Every team and every athlete is different, so think about how you can integrate these tips into your coaching. Remember that Cognitive Load Theory is all about acknowledging the bottleneck between the short and the long-term memory.

Being aware of the Redundancy Effect, the Split Attention Effect, and using worked examples and completion tasks to incorporate scaffolding into your coaching should really help.

What is flow, and how to achieve it END_OF_DOCUMENT_TOKEN_TO_BE_REPLACED