Part 1: The psychology of playing behind closed doors

Part 2: The psychology of playing at neutral venues

Just how good are our referees? 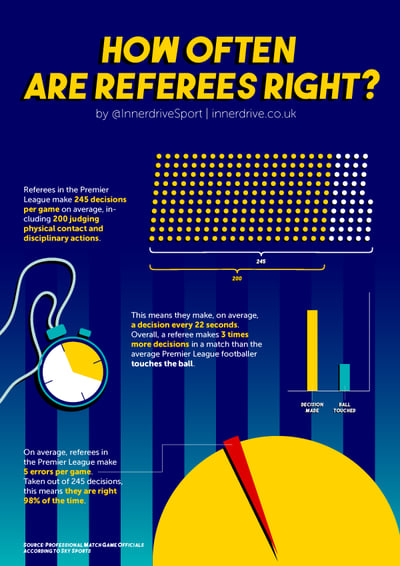 Premier league referees make around 245 decisions per game on average, all of which are made under pressure whilst the action is taking place. 200 of these are judging physical contact and disciplinary actions. This is equal to making a decision every 22 seconds. In fact, referees make 3 times more decisions than an average player touches the ball. And out of all of these decisions, it has been found that referees and their assistants, make around 5 errors per game, meaning they are correct about 98% of the time… which is incredible.

Now, given that football might be played behind closed doors, we thought we’d look at how this might affect those decisions. So, what does the research actually say?

Whether it’s the fans themselves, pundits or even sometimes the teams, we always hear about referees being influenced by the people in the ground. But does this actually happen?

One interesting study observed 40 referees, from newly qualified ones to some with 43 years of experience, to attempt to answer that question. All of the referees were shown a video of a Premier League match between Liverpool (home) and Leicester City (away) and were asked to judge 47 challenges or incidents throughout the game. At each incident the video would stop for a couple of seconds to let the referees give their decisions as to whether they thought there was a foul or not, or if they were uncertain.

However, the kicker here was that half of the referees watched the video with the crowd noise included, and the other half did not. The researchers found that a noisy crowd increased referee uncertainty, such that referees in the noise group gave 15.5% fewer fouls against the home team in comparison to those in the silent group.

As well as this, it has also been found that this bias increases largely when there is no running track in the stadium and the crowd is closer to the pitch. For example, grounds like Old Trafford and Goodison Park can make referees more prone to this effect, as opposed to West Ham’s stadium.

Why does this actually happen? The research offered two suggestions. Firstly, referees might be paying too much attention to the biased noise by the home fans and secondly, one of the main causes of stress for a referee is making a bad call against the home team.

What about home advantage and referee decisions?

It seems there might also be a home advantage effect for teams. Interestingly, home teams tend to receive less yellow and red cards and have more added time when they are losing. Apart from football, in sports like boxing or events like the summer and winter Olympics where judges make subjective decisions about performances, home advantage can also be observed.

However, research has shown that with the addition of the 5th and 6th refs in European football, there has been less biased decision-making towards the home team. One study also gives quite a nice quote on the home advantage effect, saying that ‘the referees face a double commitment: on the one hand, to be impartial due to their institutional position; on the other hand, to please the crowd’.

Read more on this subject in these blogs:

Read part 1 of this blog series here, and part 2 here.

The psychology of playing at a neutral venue END_OF_DOCUMENT_TOKEN_TO_BE_REPLACED