Have football clubs been wasting their money for years by overpaying for talent in the transfer market? Why is it that some clubs seem to underperform compared to what their squad transfer market spend might predict, whereas others don’t?

The cost of getting it wrong leads to managers losing their jobs, teams getting relegated and hundreds of millions of pounds being spent poorly. In this blog, our sport psychologists look at how big an issue this is and suggest how clubs can make better decisions in the transfer market.

How Bad Are football Teams At Judging Talent?

Let’s consider the 2017-2018 season. We can plot where each team finished in the league versus how much money their team is worth. The graph looks like this: 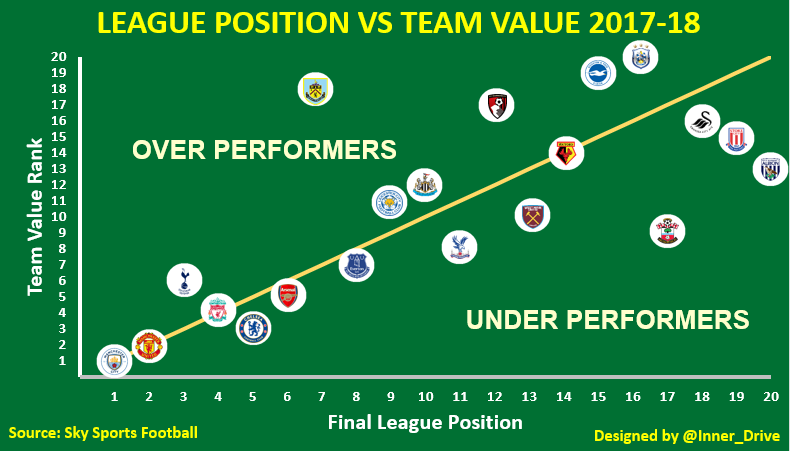 There is a certainly a positive relationship between team value and final league position. What is also clear is that some teams overperform and some underperform. It is probably no coincidence that teams “below the line” are far more likely to change their manager, as seen in the graph below. 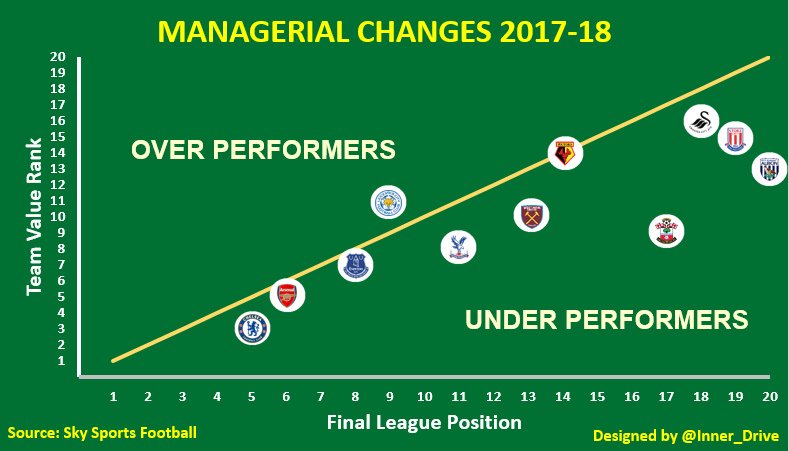 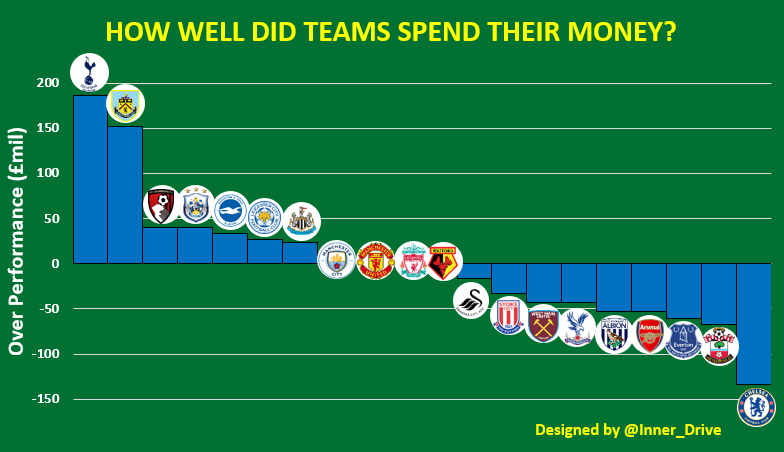 * for an explanation of how the data in this chart was calculated, see footnote

At an individual player level, consider the record club signing from some of the Premiership teams. Ask yourself if they have performed as well as their clubs would have hoped they would.

The following players all cost their clubs more than £50 million. Did their clubs get value for money? Did any of them make the impact that their sizeable transfer fee indicated they would?

How football Teams can Spend Their Money Better

We think it is fair to say that all teams could certainly spend their money more efficiently in the transfer market. For all the stats available to football clubs, at the end of the day the final decision is made by humans - and those decisions are vulnerable to thinking biases.

By applying the following twelve guidelines to their decision making process, clubs would be more likely to avoid the common pitfalls of the transfer market and would therefore spend their money more efficiently... 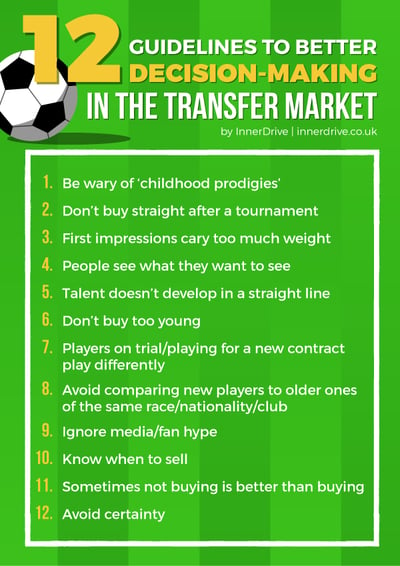 1. Be wary of childhood prodigies

A fascinating study found that, when people listen to a piece of music, they are far more likely to rate it positively if they were told that the musician was a natural and had shown signs of being gifted at a young age. It seems that we all have a ‘natural talent bias’ and are seduced by signs of early ability.

2. Don’t buy straight after a tournament

The 'recency effect’ is a psychological phenomenon that describes how people tend to place more weight on the last thing they saw. This is why popstars always play their best song at the end of their concert, so that the audience leave thinking that the whole gig was great. The same thing happens in football, and people tend to overpay for players if they’ve just had a good tournament.

3. First impressions carry too much weight

This is called ‘the halo effect’. Research has shown that students who get a good grade in their first assignment of the year are more likely to do be given a higher grade in their next one. This applies even if it is of lower quality, as teachers are swayed by their first positive impression of them. Likewise, if players have a good game the first time they are being assessed, this impression is more likely to stick.

4. People see what they want to see

Football is a game of opinions. As so much of it is subjective, it means that two people can see the same game and have very different views of what happened. If someone likes a player they are scouting and that player then gives the ball away, they might describe them as ‘positive’ or ‘adventurous’ for trying to unlock the defence. If someone else didn’t like that player they may describe them as ‘sloppy’ and ‘unable to maintain possession’. This is known as a ‘confirmation bias’ - and football is riddled with it.

You can’t predict how talent is going to develop, so anyone who does so with confidence is probably wrong. For example, in 2007, some of the leading sports journalists at the Daily Mail picked who they thought would be in the England starting XI in 2016. This is what they came up with: 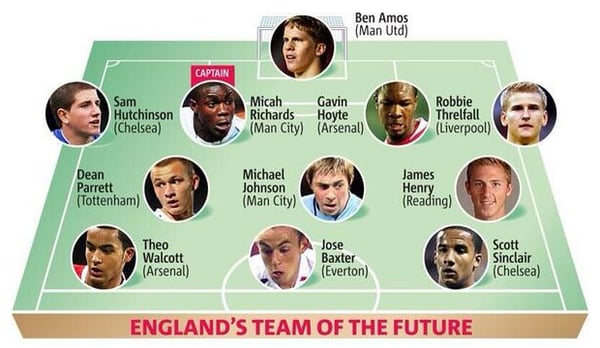 None of them picked the likes of John Stones, Kyle Walker, Dele Alli, Harry Kane, Wayne Rooney and Raheem Sterling. To give a real idea of just how bad that prediction was, only two of those players ever went on to play for England, and by the time the 2016 Euros came around only one was even playing in the Premiership (the others were playing in the Championship, SPL, League One, League Two, and one was playing in the Northern Premier League which is the equivalent to the seventh division in England).

It is a mistake to spend too much money on young players. They say the test of any weather prediction model is if it can beat the guess of ‘tomorrow’s weather will be the same as yesterday’s’. But when buying young players, we don’t even know what the weather was yesterday. We simply don’t have enough data.
The brain goes through big changes up until the early 20’s, so the 18-year-old in front of you may be very different to the person they will become in their mid-twenties. This is perhaps one of the reasons that Lyon did not sign very young players during their most successful spell in their history, as detailed in the book, ‘Soccernomics’.
It’s also worth reflecting how author Michael Calvin reports in ‘No Hunger in Paradise’ that only around 25% of players who get their first professional contract are still playing professional football by the time they turn 21.

7. Players on trial/playing for a new contract play differently

One of the most famous studies in psychology found that, when factory workers knew they were being observed, they tended to work very differently. They upped their performance. This is called ‘The Hawthorne Effect’. Players who know that they are being watched and judged will do the same. For better or worse, what you see in those few games may not be a representation of what they will do over the next few years.

8. Avoid comparing new players to older ones of the same race/nationality/club

It is now common place for young emerging players to be compared to others. ‘The new Drogba’ is one such example. Looking at the list of players who were going to be ‘the new Messi’, you’ll note that 6 out of 9 of them are either Argentinian and/or played for Barcelona.

As detailed in ‘The Undoing Project’, The NBA team the Houston Rockets found great success in assessing talent when they banned their scouts from making lazy comparisons between players based on race or nationalities. Instead, if they were going to compare one player to another, it had to be on playing style. This lead to them focusing more on their performance, behaviours and attributes, and not just on superficial similarities.

A wealth of psychological research has found that people are more likely to follow the crowd, even if they know the answer is wrong. For example, this seminal study in psychology showed people the graphic below and asked them if the line on the left was the same length as either line A, B or C. 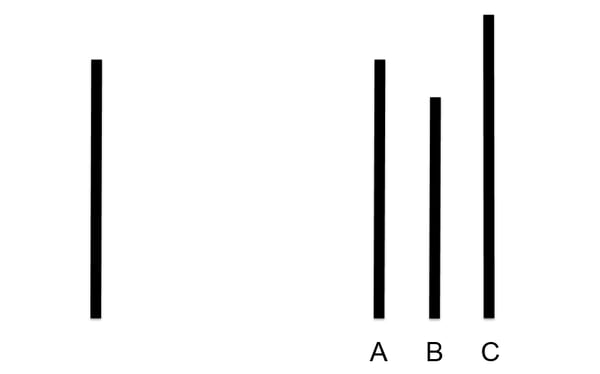 When done alone, 99% of people correctly state that the answer is A. But if you consistently put someone in a room full of people who swear that the correct answer is line C, then 75% of people will change their mind at least once and go along with the group. This is known as the ‘bandwagon effect’.
In the age of social media and 24/7 news cycles, it is easy to get caught up in the emotion of what everyone else is saying and assume that they must be right. Scouts can overcome this by asking themselves ‘would I make this same decision if I did not know anyone else’s opinion?’

There is a thinking bias called ‘the Ikea effect’ which states that people are more likely to overvalue the things or ideas that they have personally invested time and effort into. This means that clubs sometime tend to overvalue their own players, especially if they were involved in bringing those players to the club. Being objective and rational can help remove this fog of emotion.

11. Sometimes, not buying is better than buying

People often feel compelled to do something, even when doing nothing is a better option. This is known as having ‘an action bias’.

A classic example of this is how goalkeepers would double the amount of penalties they saved if they just stood still in the middle of the goal; but they often fail to do so, as the urge to do something outweighs the logic of doing nothing. With regards to football transfers, sometimes not buying a player is better than buying one.

Socrates once said that “I know one thing. I know nothing”. Likewise, William Shakespeare wrote that “the fool doth think he is wise, but the wise man knows himself to be a fool”. The Dunning-Kruger effect shows how a lack of ability is often accompanied with an inflated sense of confidence. People who state things with certainty and 100% confidence are often either wrong or trying to sell you something. Self-doubt, nuance and talking in probabilities are more often a sign of expertise. Knowing that you can be wrong, or that chance and randomness play a role in all our decisions and outcome will help guard against this bias.

Football clubs have for a long time been wrestling with the challenge of how best to assess talent. To start with, it was all done on hunch and gut feeling. Then the pendulum swung the other way and performance data was king.

However, what hasn’t been exploited yet is marrying this data with simple principles from psychology. The clubs that do this will gain an edge over their rivals and outperform their spending power. Exploiting the foibles of the human mind and guarding against common thinking biases offers the chance for clubs to more accurately assess talent - and therefore spend their money effectively and efficiently.

*An explanation of how the data in the “How well did teams spend their money” chart was calculated:

First, we ranked the teams in order of amount of money spent assembling their squads. Then we took each team’s final position and compared their spend with the spend of the team that was expected to come in that position, to give an estimate of their financial over performance. So, for example, at £243.7mil Tottenham Hotspur had the sixth biggest team value in the league and yet came third. The team that had the third highest value was Chelsea, who art £430.1 million. So an estimate of Tottenham Hotspur’s over performance would be £430.1 million - £243.7 = £186.4 million. 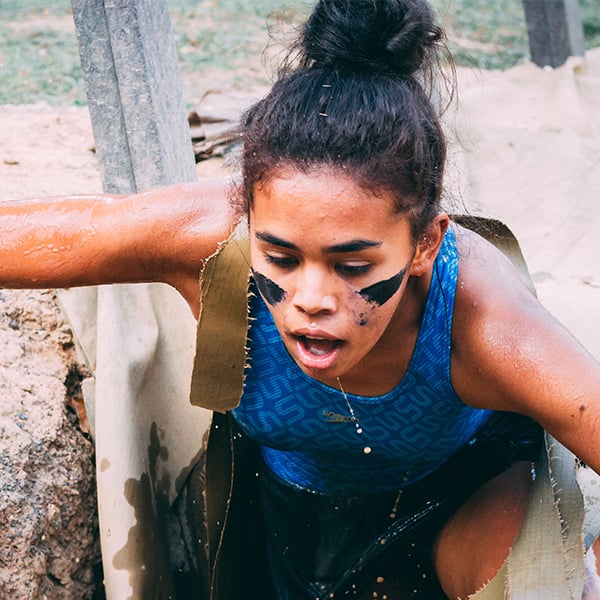 Should children specialise in one sport early? END_OF_DOCUMENT_TOKEN_TO_BE_REPLACED