We all do it. Most probably want more of it. And only a few of us are any good at it. Despite spending on average over 20 years of our life doing it, the benefits of sleep are often not spoken about clearly and explicitly to students.

The National Sleep Foundation recommend GCSE and Sixth Form Students need up to 10 hours a night. However, many teenagers are not getting anywhere near this, with many reporting that they sleep for less than 7 hours a night.

So what are the benefits of a good night’s sleep and are these the same skills that students need during revision? 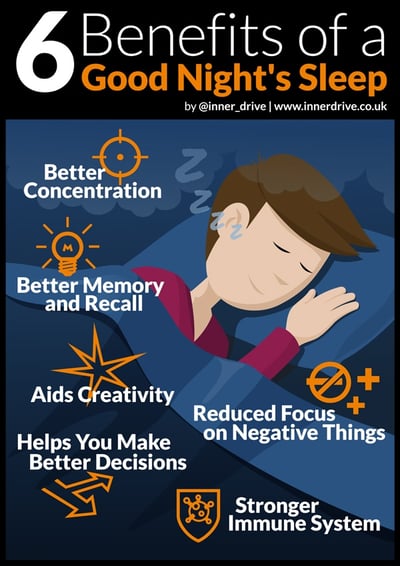 In one of the most comprehensive reviews on the effect of sleep deprivation on cognitive performance found that “first and foremost, total sleep deprivation impairs attention and working memory, but it also affects other functions, such as long-term memory and decision-making. Partial sleep deprivation is found to influence attention, especially vigilance”. This review confirms what most people know from anecdotal experience - it is far easier to be distracted or absent minded when we are tired.

One of the primary benefits of getting a good regular night’s sleep is that it aids and improves memory and recall. Recent research suggests that when we sleep new connections are formed between our brain cells. Indeed, it appears that sleep actually ‘prioritises memories that we care about’ (something that is particularly handy during revision). An undeniable part of success in exams is the ability to recall knowledge – something that sleep can clearly help with.

Find out more about the benefits of sleep on our guide page.

Getting a good night’s sleep has been found to help boost mood and general wellbeing. In a fascinating study, researchers elaborated on previous findings that people who are sleep deprived remember less, and investigated further what they did still remember. Confirming earlier findings, sleepy participants remembered about 40% less than their more alert peers. What made this really interesting was that they found that the sleepy participants remembered a lot less positive and neutral things, but almost the same amount of negative things.

Perhaps this is one reason why students feel more stressed (and more likely to be tense) during revision time? If they are not getting enough sleep, they are more likely to forget the good stuff and dwell on the negative.

Getting a good night’s sleep improves your creativity and insightfulness. One study investigating this had participants perform a puzzle that required them to discover a hidden rule to unlock the task. After having a go at it, some participants went to sleep and others stayed awake. At the subsequent re-testing, more than twice as many participants who had slept worked out the hidden rule compared to those who had stayed awake. The authors of this study ‘conclude that sleep, by restructuring new memory representations, facilitates extraction of explicit knowledge and insightful behaviour’.

Research into teenagers and sleep patterns has also found that those who don’t get enough sleep are more likely to fall ill, with a trend of reduced sleep for several nights often being followed by feeling poorly. If you have headaches, sniffles and coughs, chances are it may be because you are not getting enough sleep. The effect of sleep and how we feel is not just a physical one, with sleep also having been found to wash away toxins that have been built up during the day.

Sleep helps improve concentration, memory, positivity, creativity and health. These are the exact skills we would want students to have over the coming weeks and month. Probably as a result of these things combining, students who sleep better have been found to get significantly higher grades than their sleepy peers, with the amount you sleep making up to half a grade's difference.

It is important to note that when it comes to sleep, more is not always better. Too much and it can get in the way of students actually doing their work. The benefits to memory and recall only come into play once students have done the work in the first place. However, if we can help educate them about the powerful effects and benefits of sleep, it can make a significant impact on how they think, feel and behave.

For even more info, take a look at our page The Hidden Benefits of Sleep, where you'll find links to blogs and research.

A Parent's Guide to Surviving the Exam Season END_OF_DOCUMENT_TOKEN_TO_BE_REPLACED