Does choosing where your students are seated really matter? Well, recent studies have found that it does, with students’ behaviours and academic performance improving with a better seating plan.

But what exactly makes this so important? And what does a great seating plan look like?

Why is a good seating plan important?

Coming up with the seating plan can be a difficult task, as teachers need to make complex decisions on how to integrate students from different backgrounds and different abilities, as well encouraging a sense of belonging to the class. This has shown to be a serious challenge, with struggles in managing a classroom being one of the major causes of teacher burnout.

So, what does research suggest the best seating plan arrangements are? 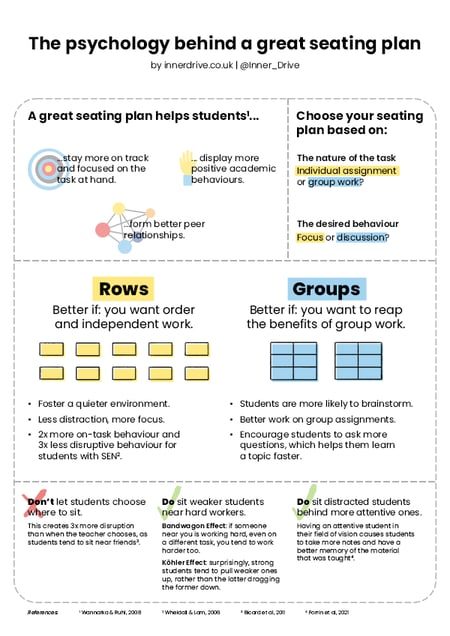 Rows vs groups vs semi-circle

Firstly, the way that the students’ desks are arranged in the classroom can have a huge impact. Within the review, the researchers found that the three most popular seating arrangements within a classroom were desks in rows, small groups or in a semi-circle. When the desks are in rows, the students face the teachers. However, when they are in a group, the students tend to face each other. Finally, when they are arranged in a semi-circle, they face each other and the teacher is in the middle

Which option is best depends on three things:

If your goal is to create order and have students work independently, then arranging your desks into rows is the way to go. Previous research that investigated teachers’ considerations for classroom arrangements found that having desks in rows leads to a much quieter environment. As students are not directly facing each other, it may mean that they are less distracted and therefore more focused on doing their work.

In another study, researchers found that having the seats in rows also benefitted students with Special Educational Needs (SEN). They found that compared to being in groups, when students’ desks were arranged in rows, their “on-task” behaviours increased from 35% to 70%. The students were also three times less disruptive.

This can allow students to focus more on their work, leading to a positive impact on their academic performance. For more ways to encourage good behaviour in your classroom, see this blog.

What if the focus for your lesson is to encourage group work? Well, having the students arranged in small groups would inspire that. Within the review, researchers found that when desks were arranged into small groups, students were more likely to brainstorm and worked better on group assignments. They also asked more questions, which is a useful skill to have as it is shown that this helps people learn a topic faster.

As shown in this study, this seating arrangement also comes with the disadvantage that students may become more distractive. However, unlike when the seats are arranged in small groups, the semi-circle structure allows the students to face the teacher making it easier to get the class's attention. Therefore, this seating arrangement is best if you want to encourage more cooperative learning, but also get your students' attention.

Overall, it is important to base your seating plan on the nature of the task. It can be helpful to use rows if you want to encourage more independent work, or have your desks arranged in semi-circles or small groups to encourage a more interactive lesson.

Who sits next to whom?

Once you have decided whether to arrange your classroom in rows, groups and semi-circles, how do you decide where everyone sits? Should students be given the option of who to sit next to? Well, research has shown that when students choose their own seats, they are three times more disruptive in comparison to when the teacher picks the seating plan. One reason for this could be because students tent to sit next to their friends which would encourage them to talk more and not stay on task.

So how should you arrange the seats? Well, previous researchers found that when students are in pairs, they are more likely to work harder on a task if the person next to them was working hard, even when they had different tasks. One reason for this may be due to the Bandwagon Effect, where people adopt the behaviour of those around them. It may also be due to the automatic human need of imitating those around you. Therefore, if you have a student who is less motivated, sit them with someone who works harder - they would both be encouraged to work at their best. To find out more about this research, see our summary of the study.

But will this affect the performance of the more attentive student? Well, according to the Köhler Effect, the opposite might happen. In the 1920s, German psychologist, Otto Köhler found that when two people completed a joint task, the individual performance of the weaker member was actually better than if they had done it themselves. Therefore, although many teachers may worry that weaker students could drag the other students down, according to this effect, the stronger students will inspire and motivate them. This in turn would mean that the less-able students would work harder and perform better.

Having a more motivated student sit near someone who gets distracted more often is not only shown to be beneficial during peer work but also when students are listening to the teacher. In a previous study, researchers strategically placed someone who was more attentive diagonally in front of another student and found that they took more notes. Simply seeing the other individual concentrate more also resulted in the student having a better memory for the information presented during the lecture. One explanation for this is that having someone in front being more attentive it makes them more encouraged to listen. Therefore, within the classroom it would be better to place someone who is more attentive in front of another student who is often distracted.

Seating plans are done so frequently, but their importance and the parameters to take into account are little-known. Strategically rearranging your classroom can help your students achieve their best.

Also, don’t be discouraged to rearrange your seating plan depending on the task at hand, as different seating arrangements can help your students take more from each task.