The most powerful sentence a parent can say

The most powerful sentence a parent can say

The sentences parents deliver to their children often have more of an impact than they realise. But choosing a good sentence to say, particularly before or after a child plays sport, is tricky as parents want to make sure they are saying the ‘right thing’. So, what is the most powerful sentence parents can say?

We think the answer is simply, “I’m proud of you”. So, what makes it such a positive phrase? 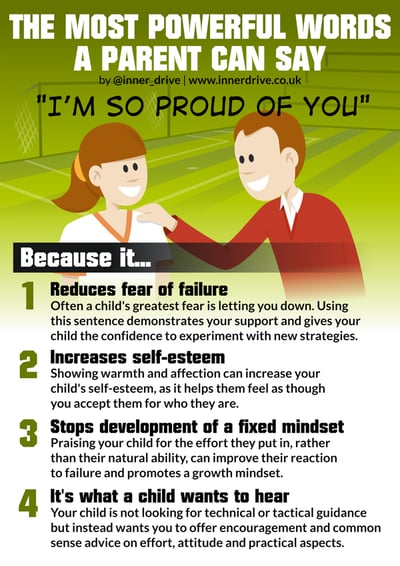 Children often fear failure and worry about letting their parents down. Therefore, parents should try and utilise the phrase “I’m proud of you”, as it lets the child know that they will always have their parents’ support and will give them the confidence to experiment with new strategies.

Research has shown that the use of sentences such as “I’m proud of you”, which are considered displays of parental warmth, can increase a child’s self-esteem. Having a high level of self-esteem is beneficial as it makes the child feel as though they are a valued individual and that others accept them for who they are.

Using phrases such as “I’m proud of you” also stops parents from overvaluing the talents of their child, and comparing them to others. If parents consistently praise their child by saying “You were so much better than X”, this can lead to negative outcomes for the child, for example increased levels of narcissism.

In one particular study, researchers looked to investigate whether the type of praise a child is given has an impact on their mindset and reaction to failure. Children were either given ‘process’ or ‘person’ praise. Process praise focuses on the strategy the child is using and the effort they put in, for example “I’m proud of how hard you tried”, whereas person praise concentrates on natural ability (which children have little control over e.g. “you’re so talented”).

Giving process praise using phrases such as “I’m so proud of you” is something parents should be aiming for, as this promotes a growth mindset, which this not only leads to improved academic attainment in the classroom, but also a higher level of performance in sport and more pro-social behaviours outside the classroom.

It’s what the child wants to hear

Research has shown that when children play sport, they are not looking for their parents to give them technical or tactical advice but instead want them to offer encouragement using phrases such as “I’m so proud of you”.

Parents need to remember that they are not their child’s coach. Their role is to support their child and the strategies employed by the coach. Children want their parents to offer them common sense advice, for example on effort, attitude and practical aspects such as remembering the correct kit, rather than performance related advice.

Saying “I’m proud of you” is so simple, yet research has proved this type of sentence to have very powerful effects. When children hear this phrase from their parents they are less likely to fear failure and instead feel encouraged to learn and try new techniques. They also experience an increased sense of self-worth, which leads to improvements in wellbeing and social relationships. With such outcomes being realised, we hope that this single sentence will allow children to feel liberated to play and enjoy sport in the ways in which they are meant to. 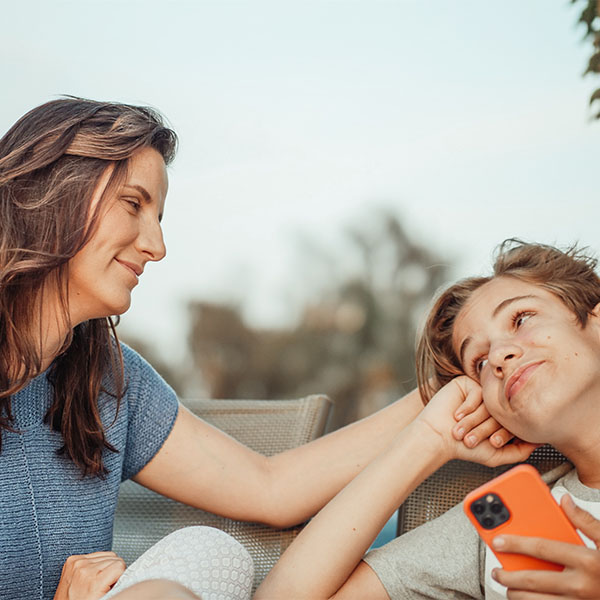 4 tips from research to support your teenager
Exams are back on - what does this mean for you?
6 questions Rosenshine suggested you ask your students
The psychology behind a great seating plan
Metacognition in the updated EEF Teaching & Learning Toolkit