Multi-tasking is a myth

Multi-tasking is a myth

Multi-tasking is a myth. It does not exist.

For things that require our conscious effort and concentration, it is all but impossible to do two things at once. When most people think they are multi-tasking, they are actually shifting quickly from one task to another. But this shifting takes time, effort, and energy. 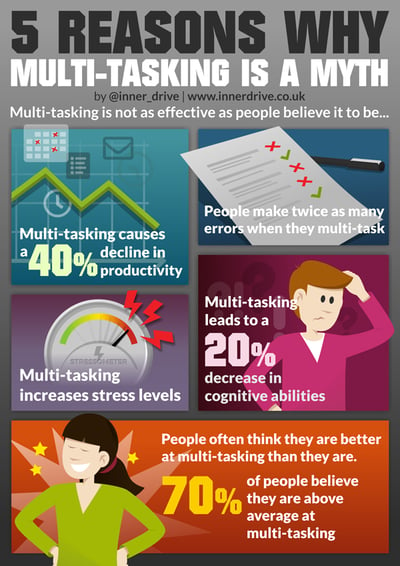 Research has shown that when people try to multi-task, they become distracted and consequently make more errors. In one particular study, 300 students were tested to see what impact brief distractions had on their performance. The researchers found that when the interruption lasted just 2.8 seconds, the number of errors made on the computer task doubled. When the interruption lasted only 4.4 seconds, errors quadrupled.

More worryingly, other research has shown that multi-tasking can cause fatal errors, as drivers who looked at their phone were twice as likely to miss stop signs. Clearly, splitting our focus results in us taking our eye off the ball.

Multi-tasking can waste time and reduce productivity. In one study, young adults were required to switch between different tasks, such as solving maths problems or classifying different objects. The researchers found that all participants lost time when they had to switch from one task to another, with this time increase being larger when tasks were more complex or unfamiliar. This may be because it takes time for the brain to turn off the cognitive rules associated with one task and switch on those associated with another.

In one clever study, participants were given a number of emails to reply to as quickly, correctly and politely as possible. The researchers looked to compare two conditions; one where participants had to immediately respond to a supervisor who interrupted them and another where people could focus solely on replying to the emails. When participants had to multi-task they experienced higher levels of stress and frustration and felt under greater time pressure.

Other research surprisingly demonstrated that those who frequently multi-task are the worst at it and show the greatest decline in cognitive abilities. When participants were shown a range of coloured shapes and asked to remember the position of some and ignore others, those who frequently multi-tasked were found to be more easily distracted, unable to filter out irrelevant information and less likely to remember what they had seen.

Research has found that individuals often multi-task because they believe they are good at it. In a recent study of 310 students, it was found that 70% believed that they were above average in multi-tasking abilities. Those who wrongly believe that they should multi-task because they are good at it are often those who are most ill-suited to carry it out, and more likely to show high levels of impulsive behaviour.

Research suggests that multi-tasking is an inefficient strategy because it causes individuals to make errors, causes stress, reduces cognitive abilities and hinders productivity. If accuracy is important, it is best to do one thing, finish it and then start another.