What can we learn from other countries' education systems?

What can we learn from other countries' education systems?

Recent international league tables make for worrying reading for educators across England. The country falls outside the top 20 in its ranking for Maths and English, whilst only placing 15th in Science. It appears that many other countries are ahead of England and therefore it is interesting to consider what other countries do, to see if we can learn anything from them.

When considering what other education systems do, it is important to acknowledge two things. Firstly, what works in one country may not work in another as context, culture and history matter. Secondly, there are no simple answers for complex questions. This means that no-one factor can solely explain why one country may or may not do well. That being said, looking at what others do can offer interesting suggestions, offer food for thought and spark debate. So, what are some of the things that other countries do?

France has recently passed a law (enforced in September) banning students from using their mobile phones at school. Recent research conducted in England found that this may be a very good policy, as students who attended schools that had enforced a ban saw a significant increase to their grades, with this effect being even more pronounced for struggling students. Therefore, schools in England should consider following suit, or at least look at teaching students better strategies to manage their phones.

Find more resources to combat the negative effects of phone use on our guide page.

Finland - Not streaming by ability

In Finland, a country that has historically been consistently high in international tables, it is illegal to stream students. One fascinating study of over 19,000 students in England supports this policy, when it was found that students placed in the lower and middle streams performed worse in Maths, Science, Reading and Writing when compared with those of the same academic ability who had not been streamed.

The American Academy of Pediatrics urges schools to start no earlier than 08:30. This recommendation led to schools in 46 of America’s states to shift their start times, some of which were delayed until as late as 09:30. One particular study conducted over 3 years and looking at over 9,000 students found that shifting start times to at least 08:30 helped more than 60% of students to get at least 8 hours sleep. Furthermore, later start times lead to improvements across subjects including Maths, English and Science.

But why do later start times improve student performance? Research suggests that teenagers need more sleep than adults, and also feel tired later in the evening. This means that many of our students are not getting enough sleep, which has an impact on grades. (There are some interesting studies currently being conducted in England to see what impact school start time has on students – when this data is released we will definitely blog about it).

China is renowned for developing exceptional maths abilities in its students such that, by age 15, students are up to three years ahead of their English peers. Some have suggested that this may be, in part, due to their mindset towards maths. Emphasis is placed on an expectation that students can all do maths, with lots of practice and support on how to get better.

Strategies to help develop growth mindset are common place in English schools, though there is a worry that this is sometimes not done in the most effective way. For more information about this, check out our blog on ‘Strategies to Develop a Growth Mindset’.

Collectivism, as seen in Japan, creates communities of learners who look to assist each other instead of working alone as individuals. Learning from and teaching other students not only benefits the learner but also the teacher. Teaching other students helps students clarify what they do and don’t know, as well as structuring their thoughts in a logical manner. This act of retrieval also helps embed knowledge in the long term memory.

A collectivist culture also creates families who are supportive of the school system and educational achievement. Receiving emotional support from family is hugely beneficial and can foster academic success whilst also helping improve student well-being.

We can learn a lot from other countries education systems. No country has all the answers, and what works somewhere will not necessarily work elsewhere. However, it definitely poses questions about what best practice looks like. Areas that are definitely worth considering include banning mobile phones, developing a growth mindset, starting school later, not streaming by ability and adopting a more collective culture. 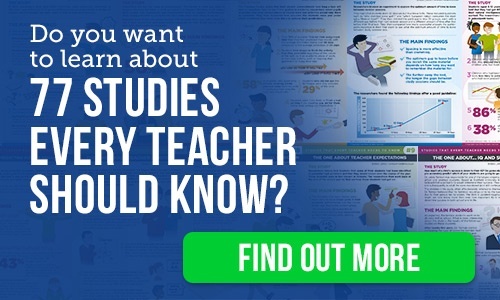 How to spot hype END_OF_DOCUMENT_TOKEN_TO_BE_REPLACED