If I offered you a marshmallow and told you that if you refrained from eating it for 15 minutes, I would give you two instead, would you be able to do it? In the early 1970s, Stanford researcher Walter Mischel asked 3-5 year-olds this question, and the results changed how we viewed self-control forever.

The marshmallow experiment is famous in psychology circles for two reasons. Firstly, it is so simple that anyone can administer it, and secondly, because the results had more impact than anyone could have predicted. Walter Mischel tracked the participants in his study and found that ten years later, children who were able to wait and not eat the first marshmallow (delaying gratification) were rated by their parents as being more attentive, verbally fluent, academically and socially competent, and were better able to deal with frustration and stress.

Who Gives In To Temptation?

So what causes some children to seek instant gratification and eat the marshmallow straight away whereas others are able to wait? It may be down to differences in the brain, with those who give in to temptation having less activity in their pre-frontal lobes (associated with conscious decision making and impulse control) and more in the ventral striatum (associated with addictive behaviours).

Other people think it may be associated with trust, with a different study finding that if the young children don’t believe they are going to get a second marshmallow if they wait, they are more likely to eat the first one. This has some interesting implications for students who perceive school, teachers or parents as not being trustworthy.

Interest in self-control and delaying gratification has become an increasingly popular topic. Students face a multitude of tempting distractions every day. When you think about it, doing well at school is one big marshmallow test. We ask students to put off instant rewards now (partying with their friends) and work instead in order to get much better rewards later (good grades, a place at University, their dream job).

How to Improve Self-Control

Teaching students self control can be challenging. Here are five ways we can help students improve their self-control and delay gratification: 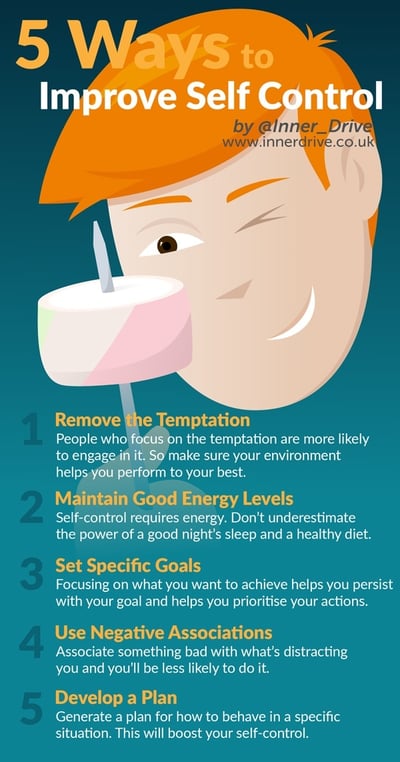 1. Remove the temptation – People who focus on the temptation are more likely to engage in it. Results from the original marshmallow study found that students were more likely to eat the marshmallow if it was in sight. A famous example of removing yourself from the temptation is when Odysseus, who was eager to hear the song of the Sirens but didn’t want to crash into the rocky coastline, had his men tie him to the mast of the ship. Perhaps this is one reason why the schools that ban mobile phones get better GCSE marks?

2. Maintain good energy levels – The author of this review into self-control states that ‘self control appears to require sufficient energy’. This would suggest that getting a good night’s sleep and maintaining a healthy balanced diet should help improve self-control.

3. Be goal focused – The authors of this study state that ‘associating momentarily alluring tendencies with incompatible, highly valued objectives should be helpful in fostering effective self-regulation’, or, in simple English, reminding yourself of your goal when you see a distracting temptation can help improve your self-control.

4. Use Negative Associations – If you can associate something bad with what is distracting you, then you’ll be less likely to do it. A good starting point here is having a frank conversation about why the tempting behaviour is unhelpful and how it can hurt your chances of achieving your goal.

5. Develop a plan – Generating a plan for how you want to behave in a specific situation will boost your self-control. This can take the form of ‘If X happens, I will do Y’. We think this is a particularly effective strategy during stressful situations, which require you to think carefully and quickly (i.e. in exams).

With more focus on the importance of grit and deliberate practice, we think this topic will become increasingly popular; however, this article, written by a Yale university student, suggests that once in a while it is actually good to eat the marshmallow. It is important to work hard, but having fun and enjoying the process along the way is also important. The answer? Find a good balance between starving yourself and gorging on every marshmallow in sight.

*Since publishing this blog, we have read this awesome article about the potential limitation of the marshmallow test. it suggests that some students 'fail' this test, but not because of limited self-control, but because they are thinking very logically. In essence, if you grew up with limited resources it makes sense to take immediate rewards as opportunities are often scarce. This is interesting to consider the potential implications of this.