There are countless teaching and learning strategies that can be used in classrooms, during revision, and beyond. It can be a long process trying to find which ones work best for you and your students and which ones just aren’t effective or practical. But with the wealth of research backing the practice of interleaving, it may be one worth considering.

Interleaving is a process where students switch between topics within a subject whilst they study in order to improve their learning. For example, an interleaved maths task would consist of a set of questions in which no two consecutive problems required the same strategy. The opposite type of study process is called blocked practice. This is when students study one topic fully before moving on to another.

Interleaving is often only helpful if the content being studied is related in some way. The more similarities between them, the easier it is for students to make connections between the two.  For example, interleaving will be more effective if used when learning different types of trees, as opposed to switching between poems and algebra equations, which is a common interleaving mistake.

Research suggests that the interleaving practice is effective in improving test scores. One study had students completing either interleaved or blocked assignments over a period of 4 months. They then completed an interleaved review assignment. After a month, the same students took a surprise test and the results showed the interleaved group outscoring the blocked group by almost double: 61% versus 38%.

Not only is interleaving useful in academics, but its positive effects can also be seen in different fields, such as sports. Research shows that retention and transfer of information is evident after interleaved practice; 30 athletes learned 3 different badminton serves over a period of 3 weeks, in either blocked or interleaved practice. After completing all the sessions, the participants were tested on their skills. Those in the interleaved group, who practiced the serves in a random order, performed better on retention and transfer than the blocked group.

There are many different revision techniques that can be implemented when studying for exams or for going over what was learnt in class the previous day. Blocked study emphasizes the similarities within each category being studied whereas interleaving enhances the contrast between different categories as topics are being frequently alternated.

Blocking can be useful in teaching as it can allow for scaffolding, an effective teaching process that consists in gradually removing support to develop independent learning. It can also be more time efficient, as teachers can plan how long they want to spend on each topic. For example, teachers may wish to spend two weeks on learning how to solve basic algebraic equations and then spend the following two weeks on line graphs. This will allow students to learn more concepts – however, the quality of their knowledge will not be as strong as when the concepts are learnt through interleaving. Blocked practice requires students to focus on one topic at a time and they very often forget its specifics soon after they move on to a new one. Interleaving ensures that students are always going over what they have previously learnt, making it easier to revise and harder to forget.

In terms of vocabulary for similar topics, interleaving can be useful as it can be easy to mistake one word for another that is similar in spelling; for example, mitosis and meiosis. These errors occur more frequently when all these concepts are studied together in one revision session, or if an entire lesson is devoted to one topic; also known as blocked practice.

Evidence shows that, while blocked practice will be great for immediate memory, interleaving leads to better long-term retention of information. In one study, students were put into one of two revision sessions: interleaved or blocked. They were then immediately given a mock test and those in the blocked group got higher results. However, a week later, students completed their final test and the results indicated that interleaving was the better revision practice. Those in the interleaved group got an average score of 63%, whereas students in the blocked group got an average of 20%. Interleaving can lead to better long-term retention because it forces the brain to continually retrieve information, as the topics are consistently changing. 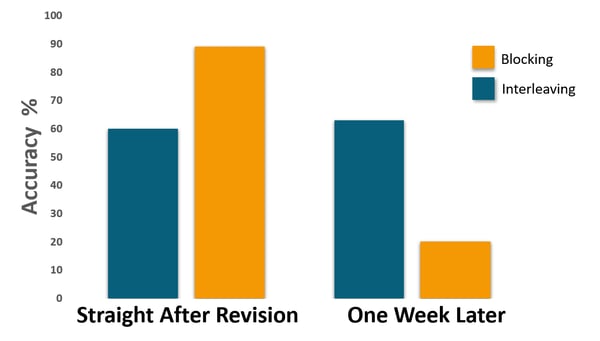 Interleaving consists of alternating between topics. It has shown itself to be highly effective through many research studies. Students studying any subjects from maths to sports can benefit from its positive effects on retention and transfer of information. Interleaving has long-term effects that will help with the development of more independent and successful learners.

How Good Is Your First Attempt? END_OF_DOCUMENT_TOKEN_TO_BE_REPLACED