How to spot hype

How to spot hype

Are you getting bored of hearing claims that are too good to be true? Not sure if you are being exposed to ‘the next big thing’ or simply the latest fad? Fortunately, researchers have found a way to help insulate yourself from all the hype, exaggerations, and general blagging that exists nowadays.

We now live in a world of fake news. Rather worryingly, many students find it difficult to distinguish the fact from the fiction.

However, it is not just students who are prone to falling for misinformation. All adults are subject to a range of thinking biases that make it difficult to sometimes see things clearly.

Fads and hype come at a price, both in terms of time and money. These two resources must be guarded carefully, as they are so precious. Fortunately, a recent study by researchers in the field of psychotherapy have designed a 19 point checklist to run through to help practitioners spot hype. We have picked our favourite eight items from this, along with quotes from the original research, which can be applied to the worlds of sport, education or business. 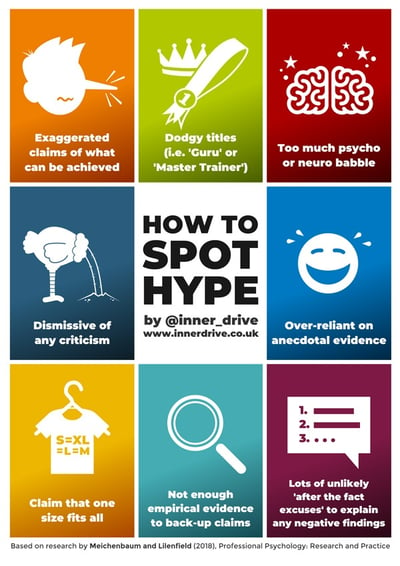 Exaggerating Claims Of What Can Be Achieved

Key words to look out for here include “revolutionary”, “ground-breaking” or “gold standard”.  The researchers comment that other dodgy phrases tend to include “breakthrough”, “paradigm shift”, “life-changing” and “dramatic”.

Be wary of anyone who calls themselves a “guru”, “master” or “leading expert”. These self-anointed titles are done to impress their audience and often are accompanied by claims that this one person/product has all the answers to a range of complex problems.

Too Mush 'Psycho' And 'Neuro' Babble

The use of sciencey sounding phrases are often used to dazzle potential followers into being impressed. Also look out for lots of funky images of the brain that don’t really relate to anything.

Dismissive Of Any Criticism

In the face of criticisms, peddlers of hype tend to question the motives and backgrounds of those asking questions. As the researchers note, “such advocates frequently neglect to discuss or even acknowledge legitimate criticisms of their (treatment) approach”.

As the famous quote goes, “the plural of anecdote is not evidence”. Saying that it worked for one group is not really proof of anything as people often confuse correlation with causality.

Claim That One Size Fits All

Nuance is important. Nothing works for everyone on everything. By taking a blanket approach to such a claim, the peddler of hype sees things only in terms of black or white, and as a result, missed the many shades of grey in between.

Not enough Empirical Evidence To Back Up Claims

When pressed, people who blag or advocate fads tend to struggle to produce any evidence from a reputable source (peer-reviewed journals would be a good starting point for this).

By doing this, they create a situation where you can’t prove them wrong. Their claims become unfalsifiable, which is a shaky ground for any product to be on.

Scepticism is healthy, as it prompts us to ask for evidence. However, if this turns in to cynicism then the pendulum has swung too far. The researchers on this original paper point out that a healthy amount of self-doubt is a good thing. Or, as comedian Tim Minchin says, “if you open your mind too much, your brain will fall out”.