The European Championship is here and many pundits are tipping France to win the tournament. Apart from having a very strong squad, a common belief has emerged that France already has a head start, as they’ll be able to benefit from the advantages of playing at home. But how real is ‘home advantage’ and, if it does exist, how much of an impact does it have?

The main consequence of playing at home seems to be the crowd’s impact on the referee and not on the actual players. In an interesting study, referees who watched a match back on TV in silence made less favourable home decisions than compared to when they watched matches and could hear the home crowd’s reaction.

Teams playing at home are more likely to be awarded more penalties, receive less yellow and red cards, and have more time added at the end of the match if they are losing. This might not be intentional, but it certainly happens. This suggests that the effect of the crowd results in a subconscious bias from the referee towards the home-team.

A study by The Times found that home teams score more goals than the away team (about 37% more). The home crowd expects them to go and attack. And they do.

Research also suggests that regular encouragement (which a home crowd tend to provide… especially at the start or when things are going well) can help motivate athletes to put in more effort. For more information about how a supportive crowd can help, see our blog, ‘How To Get The Crowd On Your Side’. 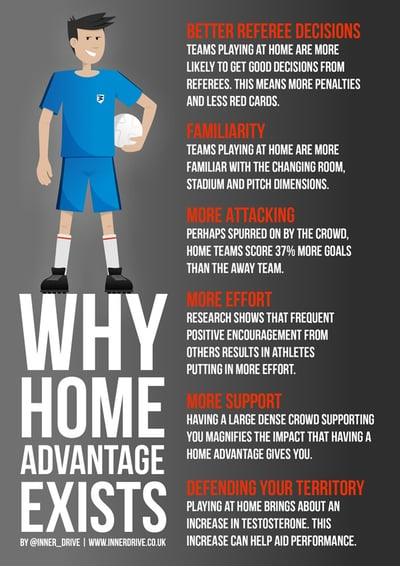 Some researchers suggest that the benefit of playing at home is less to do with the impact that a supportive crowd can have, and more about the familiarity that the home-team has. Knowing and being familiar with the pitch dimension, stadium and changing room layout may help. Some teams have been keen to maximise this and have taken to sabotaging the opposition, by altering the conditions of the away changing room. It should be said that might not have the largest of impacts but, in an era of marginal-gains, every difference counts.

Playing at home seems to impact the hormones of the athletes. One study found that ‘salivary testosterone levels in soccer players were significantly higher before a home game than an away game’.

Why might this be the case? The authors of this study suggest that it is linked to defending your territory, the desire to display dominance and assert your home authority. It is not a case of more is necessarily better but, when it comes to hormones, it seems that it can certainly help.

Home advantage has been consistently shown to make a difference in sport. Especially in sports such as football, where the whole outcome can rest on one or two key moments and decisions. France have won two tournaments when hosting, and have arguably the best goalkeeper, midfielder and striker in the tournament. Will this be their third victory as hosts?

Home teams get better decisions from referees, score more goals, can be spurred on to put in more effort, have a sense of the familiarity before and during the match, and may benefit from a testosterone boost. Will this be enough to take France to European glory in 2016? Only time will tell…