Our latest feature in our Growth Mindset Stories and Science blog series looks at both anecdotal and experimental evidence behind the importance of mindset. We look at key moments from the career of musician Ed Sheeran and tennis champion Novak Djokovic, as well as research on neuroplasticity and the link between growth mindset on grades and mental health.

Musician Ed Sheeran’s album ‘X’ has sold over 10 million copies.  He is arguably one of the most recognisable artists of his generation. However, it wasn’t always plain sailing for Ed. Early on in his career, he struggled to find his voice.

The video below is quite revealing. As well as how he sounded when he started his career, it is also interesting to note what he says about the importance of hard work and persistence. (N.B. There is a little bit of bad language in the video, so please take this as your warning :)

Not many people would have predicted the rise of Novak Djokovic in tennis. When he started playing as a professional, it was at a time of arguably the two greatest tennis players ever in Roger Federer and Rafael Nadal. Understandably, Djokovic initially struggled to make his mark:

To become world number 1 is one thing. To stay there for such a long time is quite another. How did he do it (and can he reclaim his recently lost number 1 spot)? He gives a clue into his mindset when after winning his 11th Grand Slam, Djokovic said ‘the wolf running up the hill is much hungrier than the wolf standing on the top… The mindset that one needs to have if one wants to stay up there… I think you need to work double as hard when you’re up there.’

Science Research #1 – Your Brain Can Develop

Teaching students that their brain can develop can be a good way to illustrate some of the theory behind growth mindset.  In a study of young children, researchers found that after one year of violin lessons, the part of their brain associated with music significantly developed. This clearly demonstrates that the brain is not a fixed entity.

It is important to note that this study does not say that everyone’s brain develops at the same rate, or that anyone can become an expert musician. But what it does indicate, is that people can get better. Our brains can improve and connections between parts of the brain can be strengthened. 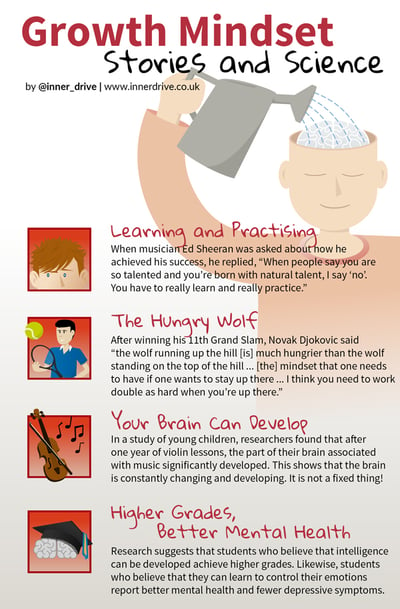 A recent study surveyed 1500 students from different year groups on their beliefs on if intelligence and emotions are malleable. They found that students who believed that their intelligence can be improved got better grades and studied more challenging maths courses.

For students who believed that they could learn to manage their emotions reported ‘fewer depressive symptoms and, if they began middle school with lower well-being, were more likely to feel better over time’.

The second finding regarding emotional control is a particularly interesting one. People often focus on growth mindset, but then fail to think what skills do we really want students to grow. Skills such as self-regulation, emotional control and self-awareness would certainly be high on our list.

10 Ways to give better feedback END_OF_DOCUMENT_TOKEN_TO_BE_REPLACED