Does having a growth mindset help reduce cognitive load?

Does having a growth mindset help reduce cognitive load?

Growth mindset and Cognitive Load Theory are arguably two of the most popular psychological theories in education. Often, these theories have been seen as separate entities. However, a new research paper has been published that examines the effect having a growth mindset has on cognitive load.

What is a Growth Mindset?

Having a growth mindset has shown to have many benefits for students including:

Cognitive Load Theory highlights the fact that during learning, new information is held in our working memory, which has a very small capacity. This contrasts with long-term memory, which is very large. Therefore, transfer between the two is key. Unfortunately, this transfer does not always occur. This can occur for many reasons, one such one being if students are presented with too much information. This theory therefore relates to helping ensure we find an optimal load for students to process.

What does the latest research suggest?

In this recent study, the researchers investigated whether having a growth mindset could help reduce a person’s cognitive load and therefore help them perform better when tested on the new information they learnt. 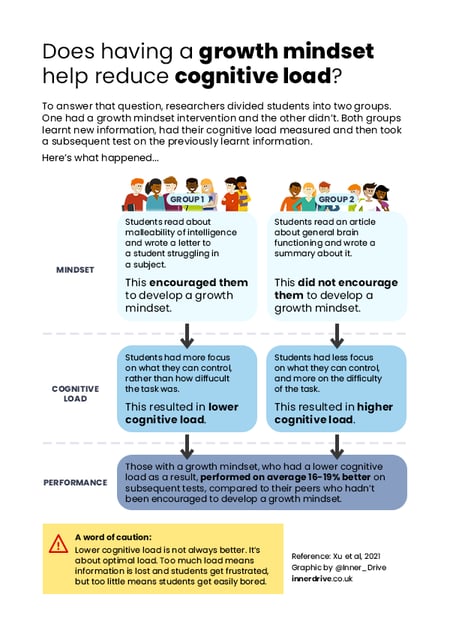 Following this lesson, students’ cognitive load was measured using a questionnaire. This questionnaire included items such as “The text that I just read was very complex”. (As a side note, it is worth mentioning that although this might measure their subjective cognitive load, it might not distinguish between those who have a high cognitive load and those who generally struggle to read a piece of text). The final task was to take a retention and transfer test on the material they just learnt.

So, what did they find? Well, the students in the growth mindset group showed:

Why is this? The researchers suggest that having a growth mindset means that students are less likely to pay attention to factors that are uncontrollable, for example thinking that a task is too difficult to understand. Instead, they are more likely to focus on things they can control, such as working harder in learning the material and being more motivated to learn it. This lowered the demands on their cognitive load, and as a result, they perform better when having to retrain new information and when they complete subsequent tests.

How can you apply this in the classroom?

As this research suggests that having a growth mindset is beneficial when learning new material, it may be useful to encourage your students to develop a growth mindset. Some ways you can do this include:

A Quick Word of Warning

Often, Cognitive Load Theory can be misinterpreted. Although this study shows that students performed better once by reducing their cognitive load, this is not always the case.

Cognitive Load Theory is more about finding an optimal load, as opposed to just reducing it (though of course reducing it can help find an optimal load). We like to think of this is as the “Goldilocks Effect”: the amount has to be just right. Having too little cognitive load could mean that the students may be bored. On the other hand, having too much would mean that the information would get lost as they are confused or stressed. To find out about 4 problems Cognitive Load Theory still needs to sort out, see this blog.

Having a growth mindset can have many benefits. This recent study shows that one reason for this could be linked to the Cognitive Load Theory. By helping students develop a growth mindset, it could mean that they try and put more effort into the task rather than thinking of things that are uncontrollable. As a result, students may perform better on the task.