Do students with a growth mindset get better grades?

Do students with a growth mindset get better grades?

The Growth Mindset theory states that how someone views their abilities impacts on how they think, feel and behave in future tasks. It is now arguably the most popular psychological theory in education.

Growth Mindset has been associated with a range of benefits that include persistence, seeking better feedback, coping better with transitions, grit, and pro-social behaviours. These are often the behaviours associated with doing well at school. But does it translate into better grades?

There have been many studies on the subject, and not all of them agree on the answer. So, here are all the studies we are aware of (and their findings), so you can decide for yourself.

Numerous studies conducted by many different researchers have found a strong relationship between students who have a growth mindset and the grades they achieved.

The largest of these is the 2018 results from the Programme for International Student Assessment (PISA). This involved a survey of over 600,000 students across 78 countries, including the US, which found that students with a growth mindset performed dramatically higher than those with fixed mindsets, in reading, science and maths. They also found that growth mindset was linked to greater student well-being. We actually wrote a more in-depth blog about these finding, which you can read here.

Researchers Susana Claro, David Paunesku and Carol Dweck from Stamford University also reported a large scale study of over 160,000 students which found that growth mindset predicts grades across every socio-economic level in students in Chile. Another study by Director of Alliance Research for WestEd, Jason Snipes found that in 121,835 pupils in America, those with lower grades were more likely to have a fixed mindset. Both of these studies are fascinating and very important as they use a very large sample size (potentially adding weight to their findings).

Likewise, a different study by David Paunesku, Gregory Walton, Carissa Romero, Eric Smith, David Yeager and Carol Dweck from Stamford University and the University of Texas on 1,500 students found that combining a growth mindset and a sense of purpose intervention improved the likelihood of students completing Maths, English and Science courses and doing better along the way. This impact was most pronounced for students who were struggling and deemed most “at risk”.

Other studies that show a positive relationship between growth mindset and grades include this one of 373 students by Lisa Blackwell of Columbia University and Kali Trzesniewski and Carol Dweck of Stamford University. They tracked students for 2 years and found a positive relationship between mindset and academic achievement. This study of 385 students in Norway by Eric Bettinger, David Yeager, Ben Domingue, David Cooper and Mari Rege found a positive relationship between growth mindset and grades, as did this study on 312 female high school students in England, with growth mindset also being associated with conscientiousness and academic effort. Finally, a study of 115 students found that “students who believed that intelligence could be developed earned higher grades and were more likely to move to advanced math courses over time”.

Growth mindset has also been found to help to improve grades in students who are likely to suffer from the “stereotype threat”, which is when they believe certain stereotypes about who does well in certain subjects. For example, this study by Catherine Good and colleagues from the University of New York on 1,005 students found that growth mindset improved a sense of belonging in females pupils studying maths, which improved their grades. So did this study on 79 students by researchers from New York University, Winona State University and The University of Texas, which found that teaching African American students about a growth mindset and how it related to learning led to those students, on average, getting a boost in their grades. These students were also more likely to report greater enjoyment about school and were more engaged in lessons afterwards as well.

A recent paper published at the start of 2018 found similar results. In this study, involving 65 schools and 12,542 students, the researchers found that a brief mindset intervention improved the likelihood of students graduating. Again, the students who made the most gains were the ones who had previously been struggling and not doing well at school.

Similarly, this well-controlled study of 6,320 lower-achieving secondary school students in the US found that short online activities which taught students growth mindset beliefs (i.e. that they could get smarter) improved grades and increased enrolment to more challenging maths courses.

That’s a whole lot of evidence. Interestingly, several of the studies so far suggest that growth mindset might be particularly beneficial for struggling students, or those from disadvantaged backgrounds. In contrast, this study of over 2,000 high school students in India found that combining growth mindset and internal motivation strategies helped students get better grades, and this was especially true for high achieving students.

So to summarise, at least 13 studies from students of different ages, genders and nationalities from around the world show a positive relationship between growth mindset and better grades. We say “at least 13 studies” because this is not an exhaustive list based on an extensive literature review, simply the studies we are aware of. The truth is, it is likely that even more exist.

The Sutton Trust commissioned a study that found that students who received a growth mindset intervention made, on average, two months’ additional progress in English and Maths. However, these results weren’t statistically significant, which means that this difference may be down to chance.

It’s also worth noting that, in the PISA study mentioned at the beginning of this blog, although the evidence was overwhelmingly in favour of growth mindset being associated with better grades and stronger well-being, this wasn’t the case for all of the countries involved in the study. For example, in China and Lebanon, there was no association between growth mindset and improved grades, and in other East Asian countries, such as Japan and Korea, the association wasn’t as strong. So, perhaps growth mindset can have a positive impact, but this may only happen in certain cultures.

In an attempt to find a more definitive answer, at the start of 2018, some researchers combined every known growth mindset study to measure the average effect. Their results? Based on a sample of 365,915 students, evidence of an effect on school achievement overall was weak. However, they found that growth mindset did have a small positive effect on grades, and that this might benefit students who are struggling at school, or those with low socio-economic status, more than others.

Growth mindset = no difference in grades

One of the first studies to show no relationship between growth mindset and grades was done by researchers Yue Li and Timothy Bates. They examined 222 students in China (their study is an interesting one to read, which you can do here).

Since then, several more studies have pointed to the same direction. This study of 404 students from disadvantaged backgrounds in Chicago found no evidence that a growth mindset intervention improved school achievement or psychological outcomes. Neither did this study, which assessed the impact of an intervention across 202 schools in Argentina, a developing country. These are both in contrast to the evidence which suggests that growth mindset may have more of an impact on improving the grades of lower-achieving or low socio-economic status students.

Another interesting result was the follow-up study by the Sutton Trust, published in 2019. Again, they gave students a growth mindset intervention, combined with accompanying resources. This time, the study found no evidence that the growth mindset intervention improved children’s English or Maths ability compared to students in the control group.

So, based on all of this evidence, does having a growth mindset help students improve their grades? The answer is probably that it depends. It may depend on how strong students’ growth mindset beliefs are, or on the quality of the intervention used to develop their mindset. It may depend on the student, whether they are struggling or doing well at school, whether they come from a less advantaged background, and it could also depend on how well the student can use other strategies to aid their learning, like metacognitive strategies or resilience. Finally, it may depend on one’s cultural background, too. 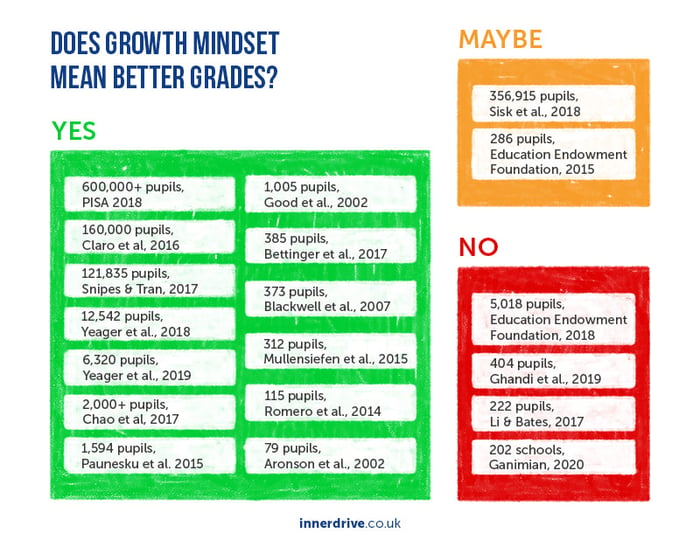 Whether or not growth mindset actually improves grades, what we do know is that it has been associated with a whole host of other positive areas, such as persistence, seeking effective feedback, grit and pro-social behaviours.

Which means that the question is less “does growth mindset improve grades?” and more “how do we design interventions to maximise the impact of growth mindset?” As with most things in psychology, the key isn’t just what you do - it’s also how you do it.

If you're interested in the subject, check out our guide page "How to develop a growth mindset in schools".

How to help students settle into the new school year END_OF_DOCUMENT_TOKEN_TO_BE_REPLACED