How to think like a leader: a guide to decision making

How to think like a leader: a guide to decision making

As a leader, it’s important that you remain unbiased in the workplace. But the reality is, cognitive biases can influence everyone — our brain is vulnerable to such things.

The best defence a leader can have is being aware of such biases and how they impact their thinking and decision making. Through this awareness, leaders can know what to look out for when they’re making decisions.

How do we make decisions?

According to famous psychologist, Daniel Kahneman’s Dual Processing Theory, how we think and consequently make decisions can be summarised into two systems: System 1 and System 2.

Depending on the situation we find ourselves in, our brain either activates System 1 or System 2 thinking.

What are heuristics and biases?

Heuristics can be defined as oversimplified mental shortcuts that enable us to make decisions both quickly and automatically when time is limited. Researchers proposed that heuristics and System 1 thinking may have an evolutionary basis as quick, split-second decisions would have been essential for survival. Moreover, it’s been theorised that system 1 thinking develops before system 2 thinking, which may be why our first response to problems is an emotional response rather than a level-headed one.

However, the issue with these quick responses is that they may result in systematic errors being made during the decision-making process. These errors and false assumptions are better known as cognitive biases. Because these biases are unconscious, we’re often unaware of their influences. But if you know and familiarise yourself with what common biases within the workplace are, then you’ll know what to look out for.

So what role does neuroscience play in thinking and decision making? Researchers believe that System 1 thinking specifically involves the amygdala and the basal ganglia and System 2 thinking involves the prefrontal cortex. But how? 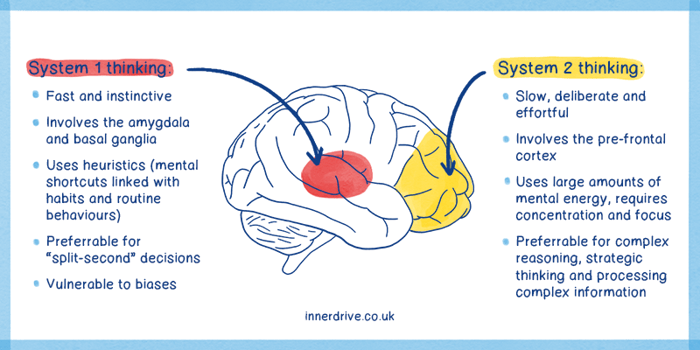 The amygdala is located in the middle of the brain (the medial temporal lobes to be exact) and is where we process highly emotional information and memories. The amygdala also acts as our brain’s threat radar and is what activates our fight or flight response. As a result, when something shocking or unexpected happens, our amygdala is immediately activated. This is so the brain can process and understand our emotional response to the situation and choose the best course of action.

This quick emotional response subsequently activates our basal ganglia (which are involved in the formation of habits and routine behaviours) and causes us to react automatically. In reward for responding quickly, our body releases Dopamine – also known as the feel-good neurotransmitter – which tells our brain that we’ve done something good. Consequently, these fast, emotional and energy-efficient responses become a habit.

On the other hand, System 2 thinking has been associated with our prefrontal cortex, which is the part of the brain involved in complex reasoning, strategic thinking and processing complex information. Although important skills for leadership, because of the large amount of mental energy the prefrontal cortex uses when processing information, it’s the last place the brain wants to go when something shocking or unexpected has happened. In fact, the brain likes to conserve mental energy wherever possible, which is why most people fall back to System 1 thinking when making decisions.

That’s not to say making quick decisions is a bad thing. Often leaders will find themselves in situations where they have to make a vital decision quickly in highly pressurised situations rather than taking the time to think through their response accordingly. Some even falsely think that needing time to think over a decision is a bad reflection of their leadership ability. But by taking shortcuts and conserving energy, mistakes can be made in the decision-making process and decisions distorted by our cognitive biases.

Cognitive biases all leaders should avoid

This is when we unconsciously favour people who we believe are like us or remind us of ourselves at one point in time. This bias stems from the concept of in-group favouritism, which is the tendency to favour people we identify as being part of our in-group rather than people we believe are different to us (the out-group). As a leader, you may find yourself promoting people who remind you of yourself at that age or preferring people who think like you.

For example, the initial price for an employee’s salary sets the standard for the rest of the salary negotiations and may result in new employees accepting lower salaries than what the company is willing to pay. When making a decision, leaders should review all information objectively and with the same weight to produce an executive summary of the information so they can make a well-informed decision.

Sometimes referred to as the hot-cold empathy gap, this is when people underestimate the role of emotions and feelings in influencing decisions and behaviours. In negotiations or group projects, this can result in individuals shutting down and refusing to co-operate because they believe their emotional state is being ignored. This can consequently negatively impact future interactions and the productivity of the team.

This is when the decision being made is influenced by the way in which information is presented or “framed”. According to prospect theory, people are risk-aversive in their choices and will avoid situations that are presented more negatively. As a result, if an option is framed in a more positive light, they will more likely decide to go with this option rather than a negatively framed option, even if they’re essentially the same thing. Leaders can use the framing effect to their benefit as a way to not only motivate employees but come across as more appealing in negotiations or sale transactions.

This is when people underestimate the role of the environment or situation in influencing a person’s behaviour and overestimate personality-based explanations for behaviours. Essentially, people’s behaviours are a reflection of who they are rather than the situation they find themselves in. For example, an employee may get into trouble for being late if their lateness is attributed to their poor time management skills rather than the fact that their train was cancelled and had to take an alternative route to work.

This bias has to do with our future selves, specifically, it’s the belief that our values, beliefs and behaviours will remain the same as they are now. We underestimate how our short-term goals and long-term goals can change over time and consequently influence our behaviour, which can result in short-sighted decisions being made. When making decisions, leaders should always account for these changes and have appropriate responses in place so they can adapt accordingly.

This is the unconscious tendency to place greater importance on more recent information and events rather than looking at the combination of both recent and historic events. For example, this could be placing more emphasis on an employee’s summary of their sales pitch rather than viewing it more holistically. Recency Bias can also result in challenges when evaluating the impact of a recent decision and biases in hiring, as you tend to remember the last few candidates you interviewed better. When making decisions, leaders need to place greater importance on the big picture rather than on an event that has just happened.

If you want to learn more about how we make decisions, check out Kahneman’s book: Thinking, Fast and Slow. 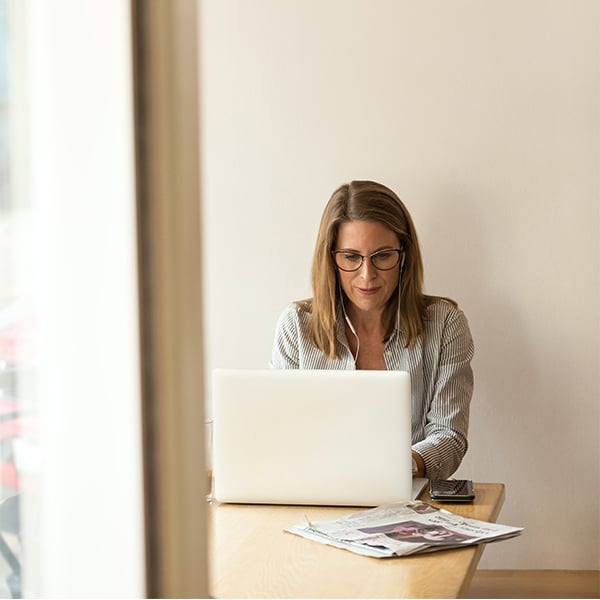 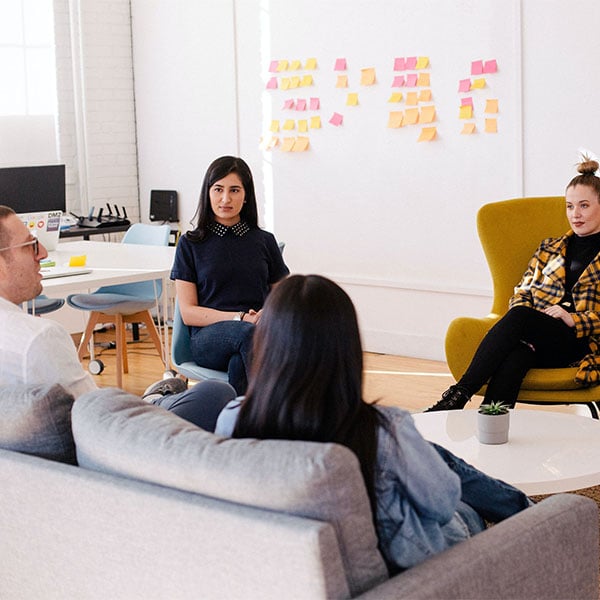 How to inspire positive change within your team END_OF_DOCUMENT_TOKEN_TO_BE_REPLACED