The Olympics: Do's and Don'ts

The Olympics: Do's and Don'ts

The Olympics is a cauldron of pressure. Four years of build up for two weeks of high performance. The consequences for getting it right or wrong are huge. So what separates the best from the rest? What are the do’s and don’ts for Olympians at the Games? Fortunately, sport psych research has examined this exact question.

The Olympic Games are often referred to as a rollercoaster. This is true for two reasons. Firstly, the wait time far exceeds the riding time. You have such a big and long build up and then in a blink of an eye it is over. Secondly, there are many highs and lows (often in quick succession). A whole range of emotions are felt and experience.

So what can athletes do to give them the best chance of fulfilling their potential at the Games? Researchers in sport psychology have looked at what strategies are helpful, and which on reflection, have hindered performance at the Games. Here is what they have found:

Departing From Normal Routines – When you are under pressure or when things really matter, that is not the time to experiment. As Olympic Champion Cathy Freeman says in this video below, four very simple words helped her perform to her best, ‘Do what I know’.

Over-training – As the Games matter so much to athletes, the temptation is to do more. More doesn’t always equal better. Rest and recovery are a key part in any training programme.

Distracted By The Media – For some sports, the Olympics is the most coverage they will receive in four years. It is tempting to say yes to everyone and everything. Saying ‘no’, and focusing on performance is a tough but important skill.

Ongoing Issues With Their Coach – If there are ongoing issues, it can lead to uncertainty, doubt and mistrust. Hardly a recipe for elite performance. In the pressure cooker that is the Olympic Games, this issues are likely to be magnified and exacerbated.

Feeling Isolated or Not Accessing Support – As previously discussed, feeling supported and asking for help has been found to be a key part in building the sort of resilience needed to thrive. If athletes feel isolated, there is a good chance they are missing out on much needed technical, tactical and emotional support.

Getting Caught Up in Team Politics – One sport psychologist once noted that at the Games, “the most important thing is to keep the main thing as the main thing”. Not letting the little irrelevant things become big things is key to this

Over-Awed By The Scale of The Games – This quickly happens once the focus drifts away from performances and on to potential consequences of either success or failure. This is similar to the previous point about keeping the main thing as the main thing.

So, that is what not to do. Which strategies do the research says should help athletes fulfil their potential at the Games?

Thorough Preparation – This often included a strong psych element, where athletes have a good understanding of how to manage their nerves, block out distractions and maintain their confidence.

Arrive in Peak Physical Condition – For many athletes, if they feel physically fit, it will help them feel confident and mentally strong. Knowing when to peak and how to tailor their training accordingly really helped.

Focus on What They Can Control – It is good to see the Games as ‘the same, but bigger’. By focusing on the things that are the same and that they can control (their tactics, attitude and game plan) and not focusing on what is different (i.e. the magnitude) this can help focus and concentration. 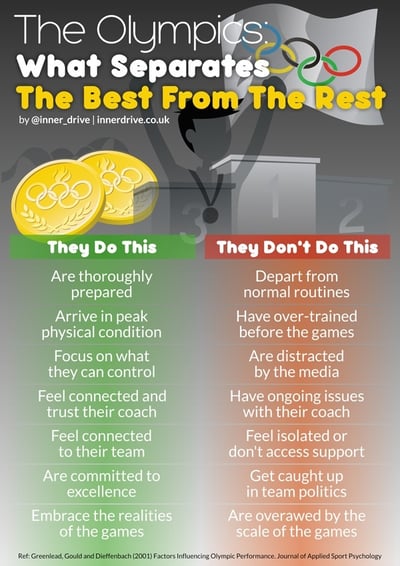 Trust and Feel Connected to Their Coach – listen to any successful athlete and they are often quick to praise their coach and support team (Andy Murray after Wimbledon successes and pretty much every contestant on Sports Personality of the Year are good examples of this). You do not have to like your coach, but trusting their expertise and feeling connected by a mutual goal definitely helps.

Feel Connected to Their Team – this include support staff (physios and sport psychs) as well as friends and family. Many athletes cite this social support as having a positive effect on their performance). This support can help athletes develop their confidence, resilience and grit.

Are Committed to Excellence – Coaches can help this flourish, but ultimately it has to come from the athlete. A great example of this is the great book, ‘Will It Make The Boat Go Faster’, by Olympic rower Ben Hunt-Davis. Whenever they had a serious question that needed an answer, they would ask themselves if it will make the boat go faster. If the answer was yes, they would do it. That is an attitude committed to excellence. (For a non-sporting example, may we recommend reading ‘An Ethic of Excellence’ by Ron Berger for a similar commitment to excellence, this time applied to education).

Embrace the Realities of The Games – This included giving it their all in a one-off competition, having a ‘no-stopping me attitude’ and knowing the importance of ‘focusing on the job at hand’. In an interesting set of results, some athletes said they benefited from a ‘show-off’ attitude, some preferred to focus on having fun, and other focused on the ‘job at hand’. Clearly no one set of beliefs is best for the Games. This suggests it is about embracing the reality of the Games and staying true to yourself.

It is easy to comment about what athletes should and shouldn’t do at the Games. Research has helped identify which strategies and behaviours should help, and which are more likely to hinder.  However, it is important to remember that each athlete is different and the above is meant as a starting guide, and not as a definitive checklist.

Athletes are often performing under great pressure and expectations at the Games. As the poem below goes, they are the ones who deserve all the credit for doing so…

“It is not the critic who counts; not the man who points out how the strong man stumbles, or where the doer of deeds could have done them better. The credit belongs to the man who is actually in the arena, whose face is marred by dust and sweat and blood; who strives valiantly; who errs, who comes short again and again, because there is no effort without error and shortcoming; but who does actually strive to do the deeds; who knows great enthusiasms, the great devotions; who spends himself in a worthy cause; who at the best knows in the end the triumph of high achievement, and who at the worst, if he fails, at least fails while daring greatly, so that his place shall never be with those cold and timid souls who neither know victory nor defeat”.