Roman philosopher Cicero once commented that “it is exercise alone that supports the spirits, and keeps the mind in vigour”. It seems that Cicero was ahead of his time and psychological research has now confirmed what he believed 2000 years ago. So how exactly does exercise help boost brain power? 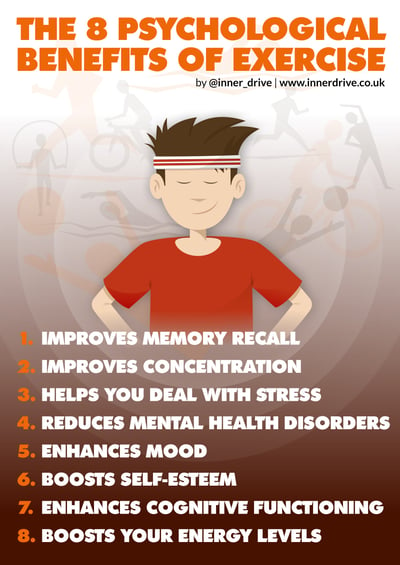 A recent study tested the impact that exercise had on learning. Researchers split participants into three groups; those that exercise straight after revision, four hours after and those who did no exercise. They found that the ability to retain and recall information was significantly improved in the group that exercised up to 4 hours after their lesson. Further investigation using MRI scans found that the area of the brain largely responsible for memory, the hippocampus, was very stimulated, especially compared to those who had not exercised. The finding seems consistent with other research, which found positive benefits of exercise and memory for both children and adults.

Researchers at Bristol University have found that people perform significantly better if they work out for 45 minutes at lunch time. As well as improving their mood and ability to deal with stressful situations, their scores for their perceived concentration levels were 21% higher on days that they exercised.

Other research based on school children found that pupils who engaged in physical activity were more focused and had better concentration in class than their peers who did not. For more tips on enhancing focus read our blog, ‘6 Ways to Improve Concentration’.

... Enhances Mood, Self-Esteem and Well Being

The World Health Organisation suggests that adults, on average , should do about 22 minutes of physical activity per day. Furthermore, being active is one the 5 main strategies that the NHS suggest in order to improve your well-being. Studies have found that regular exercisers get a benefit of enhanced mood and boosts to their self-esteem. This sort of benefit has been researched and found to help everyone, including students and older adults.

... Helps you Deal with Stress

The physiological symptoms of engaging in exercise, such as raised heart rate or oxygen deficiency through build-up of lactic acid, can be mimicked in times when our bodies experience stress. Engaging in physical activity reduces our body’s mental sensitivity to stress by enhancing how quickly we are able to recover physically.

The type of exercise we do might make a difference. Research found that those who take part in yoga or pilates report less stress, while MRI scans found their amygdala, a brain area linked to processing stress, fear and anxiety, had shrunk.

Constantly engaging in exercise over your lifetime has been found in both animal and human studies to improve cognitive functioning and brain plasticity, which is the ability for the brain to change and grow over time. This leads to a reduction in the risk of getting Alzheimers or Dementia.

A recent study examined the difference in the cognitive performance between individuals who engaged in physical activity in their leisure time and those who did not. When these participants were tracked after five years, the researchers found that regular exercisers performed better in cognitive tests.

It’s easy to be put off exercising with perceived barriers, such as feeling too tired to exercise, often being cited. However, physical activity can actually help combat fatigue and doesn’t have to be organised sport (e.g. gym classes or walking).

A study from the University of Georgia randomly assigned 36 young adults, who reported persistent fatigue, into a moderate-intensity, low-intensity or no exercise groups. Over a 6 week period it was found that individuals who were part of either exercise groups reported less fatigue and more energy than those who did not exercise.

If there was a magic pill that you could take that would improve your memory, concentration, mood, self-esteem, well-being, ability to deal with stressful situations, cognitive functioning and boost your energy, it would be the most popular drug on the market. Exercising helps you, partly by producing more BDNF (the "brain fertiliser" protein) - it is a free and guaranteed way to make you think and feel better.

So what are you waiting for? Put down your phone or log-off your computer and go for a walk, play some sport or go to the gym. You’ll feel much better for it.

*We would like to thank Alex Lucas for helping us write this blog. She is awesome.

8 ways to cope with change END_OF_DOCUMENT_TOKEN_TO_BE_REPLACED