5 ways to manage your phone better

5 ways to manage your phone better

Students are literally addicted to their mobile phones. Having parents and teachers constantly telling students to put their phone away or to turn it off is not a long term strategy. Eventually, we need them to be able to manage their phones themselves. So, what practical strategies can we encourage them to use? 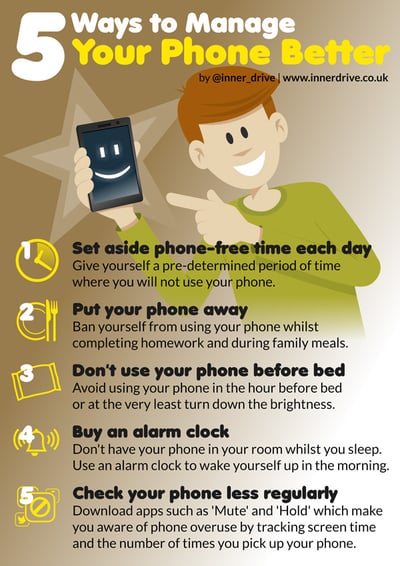 Set aside phone-free time each day

For each day, students should have a pre-determined period of time in which they will not use their phone. The famous marshmallow experiment offers a clue. In this experiment, children aged 3-5 were given one marshmallow but were told that if they resisted eating it for a certain amount of time, they would be rewarded with a second one. The researchers found that the children exhibited more self-control when they could not see the marshmallow. Out of sight really was out of mind.

Phone-free time can also be facilitated through students keeping themselves busy with other activities. For example, playing a sport or doing exercise makes people think and feel much better. This is in stark contrast to use of phones which can cause anxiety, frustration and impatience.

Put your phone away

Students should be encouraged to put their phone away when completing homework. Recent research found that simply having a phone in sight can make performance 20% worse than if the phone were put away.

Phones should also be banned during family meal times. In one particular study, researchers found that participants were less likely to engage in conversation and enjoyed the meal and interactions less when there was the presence of a phone on the table.

Research has shown that we check our phones around 85 times a day. There are a wide range of apps which can help.

One app is Mute, which makes students aware of their phone usage by tracking screen time and the number of times a phone is picked up.

Hold is another example, but this app goes even further in an attempt to try and reduce phone use by offering real-world rewards based on the amount of time students resist from using their phones.

Many students claim that they have to sleep with their phone in their room as the alarm wakes them up. However, this can be overcome by simply buying an alarm clock. By not having their phone next to their bed, students can improve their sleep quality as it removes the temptation to use their phone late into the night. Or even in the middle of the night, should they wake up.

Turn down the backlight two hours before bed

Students who are on their phones in the hour before bed are almost three times as likely to get less than five hours sleep, which can have detrimental effects on their grades. But why does using their phone before bed stop students from sleeping?

Melatonin is a hormone which should be released around 9pm that makes us feel sleepy. However, phones emit a bright light which reduces melatonin production, which makes us feel more alert. Therefore, if students turn down the backlight two hours before bed, melatonin production will not be inhibited. This leads to longer sleep duration and also improved sleep quality.

Find more resources to combat the negative consequences of mobile phone use on our guide page.