The 3 worst words to say to yourself

The 3 worst words to say to yourself

We all talk to ourselves when we do a task. For some, this inner-narrative is positive and helpful. For others, they can be their own worst critic. But are some words worse than others? In fact, what are the three worst words you can say to yourself?

When people talk to themselves in extreme terms, it tends to make them more stressed and feel more helpless. Indeed, as Obi Wan Kenobi tells Anakin Skywalker, ‘only a Sith deals in absolutes’.

Here are the three most commonly used absolute statements that students would be wise to avoid: 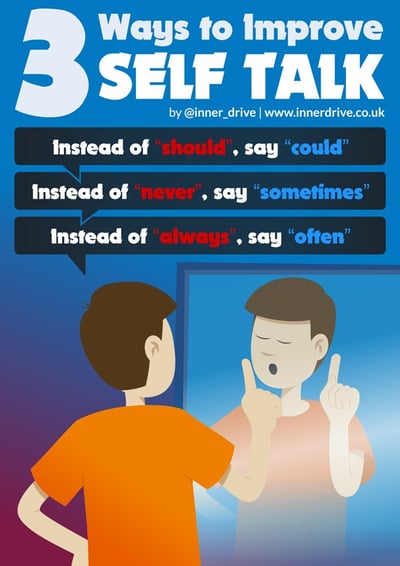 Why Are These Words Bad?

Using absolute statements can be seen to be an overly negative way of expressing your thoughts or emotions, as well as being simply inaccurate. The world is hardly ever ‘black or white’. It is more nuanced than ‘either-or’. Shades of grey and multiple options often exist.

Each of these words can inspire negative thoughts, feelings and behaviours. “Should” enhances feeling of guilt or obligation; “never” is likely to lead to feeling inadequate, stressed or frustrated; “always” makes you believe that, if something is inevitable, why even try?

Philosopher Carl Jung stated that when people talk in absolute terms, it suggests that they think they know an absolute truth. But this unlikely to be true, as a number of random factors impact what is going to happen; this is often referred to as ‘The Butterfly Effect’.

So what words would be better to use?

Talking in absolutes can lead to ‘learned helplessness’, which is when people give up without trying as they don’t believe their efforts will make any difference to the outcome. The words we say to ourselves are powerful. Teaching students how to better talk to themselves will help them develop their metacognitive and self-regulation strategies. In short, it is a gift that will keep on giving long after they leave school.

What can we learn from other countries' education systems? END_OF_DOCUMENT_TOKEN_TO_BE_REPLACED