The 10 principles of Cognitive Load Theory

The 10 principles of Cognitive Load Theory

Cognitive Load Theory has become an increasingly popular concept within education. It focuses on how we present information to learners and how to help tailor our instruction to them as efficiently and effectively as possible. It therefore has many implications that can be used in the classroom.

In a fascinating study, researchers have created 10 top principles that can help you apply this theory in your lessons – let’s take a look at them…

Cognitive Load Theory emphasises the fact that our working memory, which holds and processes new information, has a very small capacity. Therefore, if new information is not transferred to our long-term memory (which has a much larger capacity), it might be forgotten. The transfer process might also slow down if too much information is presented at once, causing a cognitive overload.

Applying Cognitive Load Theory to the classroom can help reduce the likelihood of cognitive overload. This will therefore create a more focused approach to learning, allowing students to benefit more from the lesson.


Worked examples are a very beneficial tool to use when students are relatively new to a topic. Usually, all their attention goes into solving a problem which might leave little room in their working memory to remember what steps they took to solve this problem. 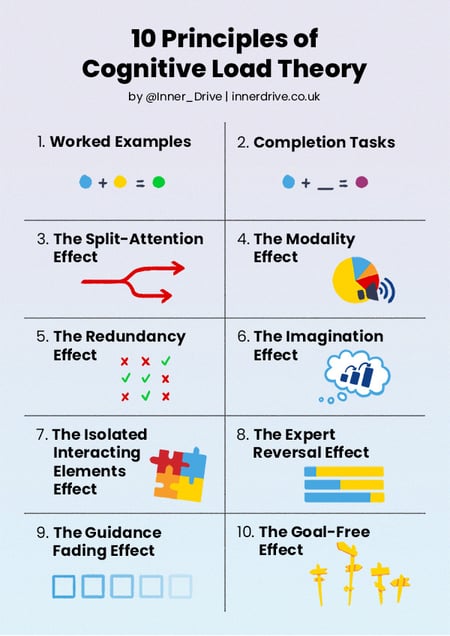 But if you give students step-by-step demonstrations on how to solve it (and crucially, keep these steps in their eyeline, so they don’t have to hold it in their limited working memory), they will have the information they need to know, therefore reducing their cognitive load. They can then help transfer this information to their long-term memory and provide them with the strategies they will need to solve similar problems in the future.


Once students become more familiar with a topic, it is useful to move on to completion tasks. This technique is a step up from worked examples and provides students with partially completed examples with gaps to fill in. Central to this task is that the completion tasks get progressively harder.

During this stage, students are already familiar with the topic, meaning some of the information is already in their long-term memory. However, they might still need a bit of help – providing some structure helps students avoid a cognitive overload but also test their knowledge.


The Split Attention Effect is when students are given multiple sources of information simultaneously, meaning they have to constantly switch between the different formats. For example, the information might be presented in a written format on the left of a slide and accompanied by a diagram on the right, requiring students to switch between the two. Having all these formats can create a cognitive overload, and research has shown that students who learn in a split-source format often achieve lower learning outcomes compared to their peers.


Having a diagram with integrated text on it can still create a cognitive overload. This is because the learner has to process both types of information using the same visual store. To prevent this, the modality effect suggests that it is better to present the information using two different formats.

For example, when learners are given a diagram, the words on it could be read out loud instead. This allows them to process the visual information separately from the audible information, reducing a risk of a cognitive overload.

This was supported in a review where researchers found that students who are given auditory words outperform their peers who are given diagrams with written texts.


Another part of Cognitive Load Theory is the Redundancy Effect. This is when students are given irrelevant information, clogging up their working memory and resulting in them forgetting the important information they actually need to know.

One way to avoid this is if you are asking students to read a quote from the board, give them time to read it themselves (instead of saying it to them). This can help, as because people read and hear at different speeds. By providing the same information, but in a competing way, it can become redundant.


The Imagination Effect is a more unusual one, and is recommended for more experienced learners. Students are given a set of instructions and then asked to imagine the process they need to solve the problem.

One example is if a student is given a question that requires reading a graph to answer. When using the Imagination Effect, they would first imagine how they would read the graph, and what information they need to take away from it. Only then would they go on to actually solve the question.

Researchers found that students who imagined the instructions answered more questions correctly than those who did not imagine the instructions. Why is this? Well, mental representations are formed in our brain when we develop our knowledge on a topic. These schemas, which are knowledge structures, help us interpret the world around us. Imagining instructions allows students to automate these schemas, therefore causing less processing in the working memory.


We can’t simplify everything: there are complex tasks that require students to simultaneously process many interacting elements before they can understand it. If the number of elements is greater than the number that can be processed by the working memory, learning might not take place.

One way to help overcome this is by processing some elements in an isolated way and then combining these together. This was found to be effective in an interesting study, where students had to expand brackets. In one strategy, students were presented with the full calculation, whereas the other strategy broke down the calculations into four different problems. The researchers found that when an isolated interacting element strategy was used, students did significantly better than those in the full-worked example group.


This effect is all to do with how much prior knowledge a student has on a topic. Although support and instruction are useful for students who are starting to learn a new topic, it can have a negative consequence on students who are more experienced with the topic.

Essentially, novices think differently to experts. As a result, they need different types of support and structure.  This means it is important to keep in mind the level that students are at when planning out lessons and make sure that the material is adjusted to meet their current level of understanding.


The Guidance Fading Effect is all about reducing the amount of guidance that students are given as they gain more knowledge in the topic. This helps ensure that they are given the right balance between being supported and challenged. It also helps avoid the Expertise Reversal Effect, as each lesson is adapted to meet the students’ current knowledge on the topic.

An example of this effect is providing students with worked examples when first introducing the lesson then moving onto completion tasks and finally the full problem for them to solve.


When students are given a problem to solve, it might have a specific goal – for example, “calculate the angle ABC”. On the other hand, having a goal-free problem would use more general wording such as “calculate as many angles as you can”.

Goal-free problems require students to then focus on the information they have and require more problem-solving skills. This type of wording also requires low levels of cognitive load and helps to facilitate learning. In a study, researchers found that students who solved goal-free problems demonstrated more superior learning outcomes compared to their peers.

Too much information all at once can affect the transfer of information from our working memory to our long-term memory. It is therefore important to help reduce cognitive load by encouraging students to pay attention to the relevant information. Using these 10 principles can help apply Cognitive Load Theory to your lessons and facilitate more effective learning.

How to help your students prepare for their first exam END_OF_DOCUMENT_TOKEN_TO_BE_REPLACED